FAILCON: LEARN FROM THE BEST

Failure is so popular these days there’s even a convention extolling it’s virtues.
Presenting FailCon to the rescue, an annual one day conference of encouragement and enlightenment for start-ups and fans of all things tech.

Seems there are lots of reasons why we fail, the first being that fear keeps us from even trying. Speaking of, I must confess to attending FailCon Oct 24, 2011 and utterly failing to blog about it. I was being all modern and efficient and decided not to scribble notes all over random flyers, rather, bring my beautiful new 11″ MacBook Air. Smugly I trotted into each breakout session and main stage lecture with not a reporter care in the world other than finding a power outlet. After a full day of university lecture-level note-taking I was briefly distracted by a photo-op. I quickly clicked on the text edit close button expecting the usual prompt asking me if I want to save the doc.
Nothing happened and at that moment I heard failure’s evil laugh. Failure was laughing at me, not with me. The computer ate my notes. About FailCon:
So folks, to quote the FailCon mission statement,”it’s time to stop being afraid of failure and start embracing it”.
FailCon rose from the ashes of numerous start-ups and a few failures, brought to life in 2009 by Cass Phillipps and Diane Loviglio. What a brilliant idea. Instead of listening to a bunch of lucky success stories talk about how successful they are, let’s listen to them confess their dark moments of despair. Bonus, we can save ourselves the time and money and walk away with their hard lessons learned.

Airbnb Epic Fail to Epic Success:
My favorite epic Fail story was from Joe Gebbia, Airbnb Co-Founder and CPO.
Airbnb turns homeowners & renters into bed & sometimes breakfast entrepreneurs. The early days of airbnb was a hilarious story about trying to start a company with a band of young bros and realizing that an easy way to bring in some bucks would be to rent out floor space for the night. I am still marveling at the image of side by side air mattresses in a big common room and the fact that they could find paying takers. I was so jazzed about the company that I signed up when I got home that afternoon.

Getting To Know Comcast:
One room and the lobby of the conference was set aside for vendor tables. I was treated as a VIP at Comcast and was easily swayed into the merits of dumping my current internet provider for a great deal on combo internet and web hosting. 2600hz Open Source Genius:
I really appreciated the chance to meet early start-up entrepreneurs such as 600hz.
They build open source software that can be delivered by telephone networks and share it with the world. Hopefully they will get their 501c3 not for profit status. Users will appreciate their private cloud with built in privacy and customization of services like voice-mail and a VPN for torrenting.
The rest is too geeky to go into.
Check em out. Flickr Fail:
To provide further inspiration I have included one of my recent flickr instagrams that didn’t quite work out but I love it anyway. So here’s my last pitch for attending FailCon, it’s pretty obvious that we have all experienced failure on a tiny to catastrophic level. Instead of hiding out, embrace your Fail & learn, grow, celebrate your soon to be success.
I’m only sorry I did not attend the 2010 talk by David Pougue, New York Times Technology Writer on “gadgets gone wrong.”

I leave you with further words of inspiration:

“Remembering that I’ll be dead soon is the most important tool I’ve ever encountered to help me make the big choices in life. Because almost everything – all external expectations, all pride, all fear of embarrassment or failure – these things just fall away in the face of death, leaving only what is truly important. Remembering that you are going to die is the best way I know to avoid the trap of thinking you have something to lose. You are already naked. There is no reason not to follow your heart.”

Fight Failure With Knowledge:
There are FailCons in San Francisco, France, Brazil & Sydney.
The next San Francisco FailCon will be held on Oct 22, 2012 at the Julia Morgan Ballroom, 465 California, Street.
Details Here: FailCon 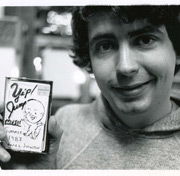 The Devil and Daniel Johnson

Chilling in Chile at the Tierra Atacama

2 thoughts on “FAILCON: LEARN FROM THE BEST”