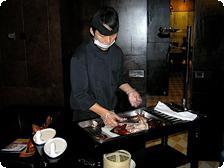 Gate to the Forbidden City

The Beijing Art Museum of the Imperial C

Beijing is a city with more than 3,000 years of recorded history and a glorious cultural heritage; yet it is also a bustling metropolitan that has given birth to an artistic youth movement in recent years. Today’s Beijing is a place where ancient historical sights stand side-by-side with a thriving avant-garde culture and a place with an identity collision with a messy schizophrenia between old and new. Explore the dichotomy of the exciting new Beijing and the beauty of the old.

SIGHTS
Old: The
Forbidden City and Imperial Palace remain must-see sights in
Beijing. Both are amazing places of grandeur and history. Built in 1406 and finished in 1420, the immense complex includes 980 surviving buildings spread over nearly eight million square feet that served as the imperial residence and court for 24 emperors from the Ming Dynasty through the Qing Dynasty. The intricate design of mostly wooden buildings showcases ancient Chinese palatial architecture, surrounded by a moat and many beautiful gardens. This UNESCO World Heritage site is the world’s largest surviving palace complex, providing a glimpse into a bygone world of royal splendor.
Insider Tip: Check out Yin, the rooftop bar at the Emperor Hotel
, which overlooks the Forbidden City and has the best views in Beijing.

New: The bohemian Houhai Lake
is one of the hippest spots in Beijing. One of several lake areas near Tiananmen Square, Houhai is also known as the “back lake” and is home to scores of restaurants, bars, coffee houses and boutiques set along cobblestone lanes. Stroll along the water and over charming arched bridges as you hop from hot spot to hot spot; or hire one of the numerous rickshaws that ply the area. For even more fun, rent a two or three person bicycle and ride down Lotus Lane, the most happening street in Houhai.
Insider Tip: The be-seen place in Houhai is Bar No Name, owned by cellist Bai Feng and known as the Cathedral of Cool. It has no address, so look for a vine-covered wooden structure by the Yinding Bridge.

MUSIC
Old: Traditional
Peking Opera is alive and well, with its colorful costumes and elaborate makeup. Accompanied by a crescendo of instruments, the unique sound of Chinese opera is different from any other in the world. The singing is usually accompanied by dancing, acrobatic stunts and even fight scenes, and the opera is played out much the same as it has been done since its origination in the late 18th century. Most operas are either comedies or tragedies, and many historical events in Chinese history have been adapted into operatic plays.
Insider Tip: See a performance at 340-year-old Zhengyici Theatre, the oldest wooden theater in Beijing and the most authentic Peking Opera venue.

New: Beijing’s experimental music scene defines the entire contemporary musical sound of the country. The city has a thriving punk-rock counterculture that has been likened to that of New York City in the 1970s. Young artists are creating their own innovative sounds in different styles including postpunk, noise rock and alternative folk. In the world of music where everyone is continually waiting for the next big thing, it seems Beijing may have created it.
Insider Tip: Two of the hottest punk bands are P.K. 14 and Carsick Cars, often playing at Beijing’s premier club, D-22 – often called the Chinese CBGB.

ARTS
Old: Beijing Art Museum of the Imperial City houses an extensive collection of priceless historical treasures including bronze and jade pieces from the 3rd century B.C. to the 17th century as well as paintings, calligraphy, ivory and wood carvings, porcelains, ancient pottery and Buddhist scriptures. The building itself is located in the Wanshou Temple, the temple of longevity, built in 1577 and serving as the place for birthday celebrations during the Ming and Qing Dynasties.
Insider Tip: The BAMOIC recently unveiled a new contemporary art collection that features emerging talent from around the world, offering you the chance to see the old and new juxtaposed in one place.

New: The 798 Arts District
is a huge haven for the creative class, housed in once decaying state-owned factories and warehouses from the 1950s. This industrial wasteland has been reborn into what just might be the most eclectic and vibrant artistic venue anywhere in the world. Expanding outward from Originality Square, 798 is home to hundreds of art galleries, studios, boutiques selling everything from high fashion to Mao kitsch, bookstores, restaurants and bars, all housed in the Bauhaus style buildings. Simply walking around can lead to fascinating discoveries.
Insider Tip: The Dashanzi International Art Festival is held every year from late April through May, showcasing cutting edge art forms in a lively atmosphere with music and film as well.

FOOD
Old: Peking Duck is the ubiquitous dish from this city, and its preservation as both a delicacy to eat and art form in its preparation is alive and well. This famous dish has been made since the Imperial era and is a national food of China. Roasted in an open-flame wood oven for hours to achieve the crispy skin and flavor, the duck is then traditionally sliced in front of diners and eaten with a rich hoisin sauce and spring onions on thin crepes.
Insider Tip: While the centuries-old restaurants Quanjude and Bianyifang are famous spots to partake of this delicacy, try also, 1949 The Hidden City. This chic enclave of restaurants, coffee/sweet shop and a contemporary art gallery is located in the restored China Machinery factory, and the Duck de Chine Restaurant serves one of the best Peking ducks in town.

New: Modern China is a melting pot of exciting fusion cuisines, where Chinese chefs and celebrated foreigners alike are creating innovative new worlds for the palate. Indulge in the epicurean discovery that is today’s Beijing dining scene at top restaurants such as Daniel Boulud’s Maison Boulud, serving French cuisine prepared with Pacific Rim ingredients in the walled compound of the former US Embassy. Or, try Ristorante Sadler, the newest offering from Italian chef Claudio Sadler in the Legation Quarter, just steps from Tiananmen Square. Jing is the city’s leading modern Chinese restaurant, located in the swanky Peninsula Hotel.
Insider Tip: You don’t have to go upscale to taste the wonders of Beijing food. Check out the crazy fun of the Donghuamen Night Market, a collection of street food stalls featuring such exotic offerings as seahorse, scorpions and starfish on a stick.

Shelley is a freelance writer based out of Austin Texas, but she vagabonds in any part of the world whenever possible. Her non-fiction book, , follows her journeys into the orphanages, streets and slums of India where millions of children live without families. Shelley’s areas of writing specialty include travel, cultural issues, the arts, women & children, non-profit and social activism, entrepreneurship, business, architecture and interior design.

be sure to also check out Shelly Seale’s webpage