I was an Italian-ignorant, lone American girl who, according to every Italian I met, could pass for 17. Yet I braved the streets of Naples, Italy’s most crime-infested city, the gritty home of the mafia, more Cairo or Bangkok than Milan and the closest thing to extreme travel on the European circuit. When I think of my intense day in Napoli, I remember littered streets, deranged Vespas, flailing laundry and gooey pizza. I credit my survival to my prudence to go without my purse and jewelry and leave before dark.

The night before, I ditched my plan to take a daytrip to a Tuscan town in the morning. Two weeks of exploring Italy alone during Christmas had worn me out, and weather.com predicted rain. I deserved an easy day off in Rome. I grabbed a Rick Steves’ Italy book from the hostel bookshelf to take up to my bunk bed. I started with the Naples chapter, although I had no plans to visit Naples. A Roman friend had advised me to skip the city, saying that he’d fear for himself on those streets. But Rick sold me with his description of ancient port city turned pulsing urban center. I decided I had to infuse some third-world style chaos into my Italian vacation to consider it an adventure. My heart pounded as I set my alarm to catch an early train south to Naples.

I left behind my handbag and instead carried a wrinkled shopping bag holding only my camera (though I didn’t dare whip it out the first half of the day), train tickets and a route I’d copied from my guidebook. As directionally challenged as I am, I refused to have my nose in a Rick Steves’ book on the streets of Naples. I stashed a few Euros along with my Visa and identification in the front pocket of my jeans under my long parka.
After arriving to Naples’ pickpocket haven of a train station, I spotted a rosy cheeked blonde with hiking boots and a backpack furiously flipping through her Lonely Planet in a corner. While silently commending my own preparation and low profile, I made my way to the Museo Archeologico, a dusty palace crammed with broken statues, the loot sacked from Pompeii and the Roman baths.

Past the grand staircase at the entrance stands the Toro Farnese. At 13 striking feet, it ranks as the tallest ancient marble group statue discovered. It depicts twins tying their father’s mistress, the witch Dirce, to a bull to be smashed against a cliff as their mother observes. Upstairs hangs a mosaic of Alexander the Great in Battle with the Persians, a remarkable accomplishment in shadowing and perspective that outdates the Renaissance by centuries. The museum’s once-locked Gabinetto Segreto exhibits erotic art, mostly stolen from Pompeii, where it adorned brothels as a menu of services and homes (especially bedrooms) and even official buildings. Along with dozens of classical bronze garden sculptures such as the capricious Drunken Faun, the museum displays a disconcerting plaster cast of a pile of Pompeii citizens cowering in a lump of terror as they took their last breaths when Mount Vesuvius spewed its final blows.

Back outside, I headed down the city’s swarming commercial street, the intimidating Corso Umberto. Noting the absence of any stop signs or pedestrian lights, I paused at street corners until I found an opportunity to cross the chaotic streets on the heels of a local. I’d read that after years of corrupt governments, Neapolitans don’t take efforts toward law and order seriously. I walked by a pair of men hurling insults charged with shaking, raised fists. I paused by a plaza to take in the Dante statue and stately cathedrals marred by graffiti and rubbish. Without any green parks or space to spare, Naples is Europe’s most densely populated city.

I decided that Naples was the Bronx of Italy. I noticed that puffy nylon bomber jackets, often in neon colors, replaced the furs and muted tones of Venice and Florence. Neapolitan women like their rhinestones and gaudy earrings. The men embody the Italian stereotype — unbuttoned shirts revealing chest hair and gold chains; leather jackets and tight jeans; oppressive cologne and indoor sunglasses. With its brash colors, the blaring Italian pop and the street peddlers trafficking mountains of counterfeit sunglasses and DVDs, Naples offers an extreme dose of Italian culture at its rawest.

When I reached the sea of concrete that is Piazza Plebiscito, I slipped in the elegant Gran Caffé Gambrinus back by the plaza, a hangout of 19th-century intellectual elites such as Oscar Wilde. Standing under chandeliers and between mirrored walls I ordered the traditional Neapolitan pastry sfogliatella, a flaky scallop-shaped crust filled with sweetened ricotta. I beamed when the barista at the crowded bar understood my pronunciation.

Outside, motor scooters raced around a fountain traffic circle facing two sophisticated remnants from Naples’ glory days: Europe’s oldest opera house, Teatro di San Carlo, and the Galleria Umberto, an Art-Nouveau shopping mall with a glass dome ceiling. I felt more at ease when I encountered a few other tourists snapping photos. I headed behind a spray-painted monument with a duck-taped head to take in harbor views of Mount Vesuvius looming over the Bay of Naples. On the way back uptown, I gawked at commanding, block-like examples of Fascist architecture with engravings hailing the powers of the state.

From there I ventured three whole blocks into the Spanish Quarter, an overcrowded, filthy neighborhood with endless lines of wet laundry. Two shady guys in leather eyed me as I climbed up the slanted street. I kept telling myself it was okay because Rick Steves suggested this detour, despite the area’s reputation as a center for organized crime and the Dickinson novel comparisons. I didn’t have the nerve to order a prosciutto and formage sandwich from the teeny grocer as Rick suggested. When two women arguing up the street glanced my way, I backed around, sure to maintain my confident gait.

Next I turned onto Spaccanapoli, the ancient Greek road slicing the city’s historic district in half. The sunlight faded in this tight, frenetic street lined with jewelry stores selling gold and silver pieces melted from stolen goods, butcheries, bakeries and shops selling all shapes of pasta or antiques. Stands displaying grotesque nativity scene figures and a few roasted chestnut vendors stuffed the tunnel of a strip. A wild-eyed woman offered a selection of heebie-jeebies-inducing potions and amulets in the superstitious neighborhood. Neapolitans prefer this crusty street scene to the walls of their apartments. The whole neighborhood seemed to be out, from gossiping grandmothers and playing children to flirting teens.

Before leaving Naples I had to eat pizza. The promise of a world-class pie was half the reason I took the two-hour train from Rome. I stopped at the L’Antica Pizzeria da Michele, circa 1870, for perhaps the best pizza in the city that invented pizza. The author of the bestseller Eat Pray Love described her eating experiences there with a near religious reverence. I discovered a two-hour wait list in the small joint with fluorescent lighting, white walls and a wood-burning oven in the middle.

I lucked out being on my own; the host immediately stuck me at the end of a table beside three Neapolitan women with clumpy mascara and blond hair. They spoke little English but managed to communicate that I was in for Napoli’s finest pizza. I explained that I was an American studying and working in Spain and was touring Italy during my holiday vacation. “Si Si,” the mother bobbed her head in understanding and flashed a pink lipstick smile. I didn’t bother correcting her when she translated to her teenage daughter and friend that I was a Spanish exchange student studying in Italy.

We all ordered the classic margherita with tomato sauce, mozzarella and basil. The slim women devoured their entire pies. I followed suit. The pizza had a doughy, crepe-like consistency with a bubbling, soupy center and puffed crust. The buffalo mozzarella tasted farm-fresh, but the simple sauce reminded my substandard American palate of canned tomato paste.
My dinner companions warned me that the 15-minute walk to the train station was risky at night. They insisted I leave as soon as I finished my pizza, swinging their arms to indicate that I should run. Despite their warnings, they waved ‘arrivederce’ and hopped into their four-seat car without offering me a ride.

I got another taste of Neapolitan hospitality as I rushed to the station. I ducked into a storefront to peek at my map, not wanting to announce my confusion on the streets crammed with dodgy dealers hawking heaps of stolen electronics. I dropped a crumpled receipt into what I assumed was a waste bin. A saleswoman shrieked what I deciphered to be “What do you think you’re doing?” I realized it wasn’t a bin but an umbrella holder. I mumbled a mi dispiace (sorry) and fled to what I considered the safety and comfort of Rome.

Rachel Ward is a freelance writer who has contributed to Time Out Buenos Aires, Transitions Abroad, The Traveler’s Notebook, Wanderlust and Lipstick and Tango Diva. Check out her blog Serendipitous Senderos. 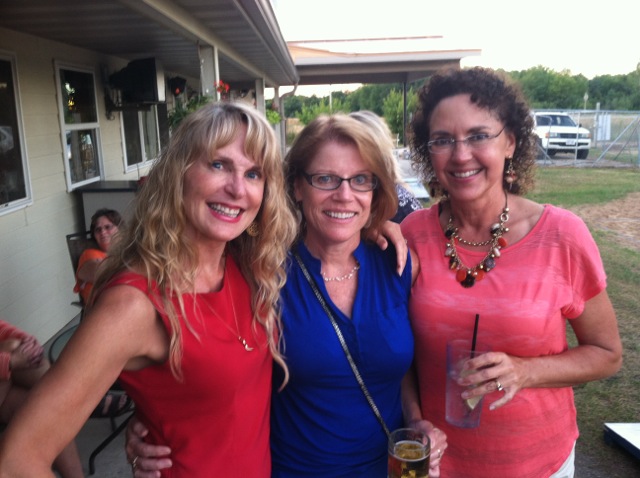