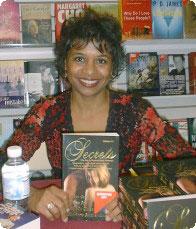 In between writing her current books and fantasizing about the next one, Rachelle Chase works as a business consultant in the unromantic, though sometimes comic, corporate world, and squeezes in the occasional modeling gig.

2. What’s your writing process like? Is the first draft publishable or is your magnum opus top secret for years?

Let’s see…I stare at a blank page, then go write emails, then come back to the blank page, write a sentence, stare at the sentence, then delete it, realize I’m hungry and a fabulous four course meal is required, so I hunt through dust-covered boxes for my cookbooks, make a grocery list, go to the store…The actual tasks vary, but the end result is the same: My “writing process” is fraught with p-r-o-c-r-a-s-t-i-n-a-t-i-o-n. LOL

Regarding the second part of your question, if the above “process” didn’t give you a clue, I’m a slow writer. While I’ve tried to write whatever comes to mind, to just get it on paper, the analyst in me resists that, so I tend to think about words as I write. As a result, while my first draft is not publishable, most everything is usable and future drafts consist of tightening, fixing plot issues, etc.

Writer’s block usually surfaces when I don’t know enough about my characters or haven’t thought the plot out in enough detail, or the plot has changed since I first started the book. In short, it’s because I don’t know some crucial element so I’m blocked. So I brainstorm on paper (or the computer), jotting down a question and then jotting all answers that come to mind, no matter how crazy they are, until I hit one that resonates with me. I keep doing this until I have enough answers to start writing again. Then, I realize I’m hungry and a fabulous four course meal is required, so I must go find my cookbooks…LOL

4. What two writers inspire you the most? Please regale us Divas with a couple of book recommendations.

From the Corner of His Eye, by Dean Koontz. Yet again, Mr. Koontz has made the impossible seem believable (i.e., a young boy born without eyes who is able to see), made the twisted logic of the psychopath seem real, and used the supernatural elements in a tale of good vs. evil to create a highly enjoyable read.

5. What were your best and worst travel experiences?

My best was the three week, 26-city jaunt through Italy that I did a few years ago alone. I experienced so many different sides of Italy, all of them awe-inspiring. My worst was a travel writing trip to France. Provence was great but the travel writing portion—which was the only reason I chose to travel with a group—was a total disappointment.

6. Where is your favorite writer’s retreat? Tell us about a place that really gets the juices flowing.

Almost anywhere in Vermont, especially during the Fall when the leaves are changing color. I love hills/mountains and trees and all that greenery, not to mention the quaint villages and old houses and the fact that there’s actually space—oftentimes acres—between houses. I almost bought a farm house, then a country store there, but chickened out. The timing wasn’t right. But I plan to try again in a few years—to buy that farmhouse and create a B&B that caters to writers. All Divas will be welcome.

7. If money and time were no object, where on earth would you go? Why?

I think I’d like to live for a year on one of those luxury cruise ship residences (I forget what they’re called) that travel the world, docking at different ports every week or so, because it’d give me a chance to get a taste of so many different parts of the world, in luxury, with no effort on my part in getting there.

8. Of all that you’ve written, what makes you the proudest? Why?

My last book, The Sin Club, which will be out in December 2007. It contains three stories woven together by a radio talk show called The Sin Club, where the host encourages listeners to sin (in a good way!). I’m proudest of this one because the heroines are all different (from optimistic to jaded to playful), and each story is unique and very different from the others, as well as any that I have ever written. I experimented a bit with this one and am really pleased with the results.

9. How did you first get published?

I saw bestselling author Lori Foster’s online writing contest, which required a 750 word entry. “Even I can manage to stay focused and write 750 words,” I thought. I did and won the Pick-of-the-Week, which resulted in Lori’s publisher calling to request the full manuscript. I only had 750 words, so I had to scramble to finish it, which I did. She rejected it but Red Sage Publishing bought it. It’s my novella, “Out of Control,” in Secrets Volume 13.

I really need to come up with a sexy, fun answer for this question. But, until I do, I’m forced to give the honest one: I don’t write about real experiences or real men, though real experiences/men do trigger stories. For example, last year I was standing on a corner and this guy drove by and shouted his number out the window repeatedly and asked me to call. Annoyed, I thought, “Who on earth would call some guy who shouts his number out during a drive-by?”

When I was working on The Sin Club, I remembered the incident and my heroine in “A Sinful Proposition” does call a guy who does a drive-by. The stripper a group of girlfriends and I hired for another friend’s birthday is the inspiration behind my current project, Wet Dreams.

11. And finally a word from our Featured Diva—give us a stirring, Diva-worthy battle cry for women everywhere to hear!