I’d heard some good things about Betelnut, so when my editor announced our staff was having lunch there to punctuate the end to a fabulous July, I got excited. I even wore my ascot.

It’s no wonder San Francisco has so many good Asian restaurants: the city boasts the largest Chinese population in the West. Betelnut, on Union Street, has long been a target destination for our pulsating and food-happy community. I was about to find out why. But let’s not start at the beginning. Let’s go straight to the main course.

You actually have to crack it with a mallet. You can’t just give it a good whack, either. All four sides need attention. First it’s stuffed with corn, pork belly, and maitake mushrooms, tied shut to contain all moisture, wrapped in lotus leaves, and then wrapped in clay.

When the lotus was finally peeled back a whole chicken was revealed—bright and glistening, it sat there exposed after all that preparation and three hours in the cooker. Several gasps were heard from our table. A woman, piqued with curiosity and (no doubt) desire, came over just in time to watch ginger, soy, and garlic drizzle over the meat and onto an otherwise clean white plate.

As legend has it, a beggar from China hundreds of years ago stole a chicken from the Emperor’s palace, ran into the woods with it, and having no other way to cook the bird, wrapped it in clay and threw it into a bonfire. When the Emperor smelled the aromas coming out of the woods he sought this man out and made him Chef of the palace.

It’s called Beggar’s Chicken, and Executive Chef and Partner Alexander Ong serves a highly sought-after version on special occasions at his palace. You guessed it: Betelnut in San Francisco.

And I thought the meal was over before the chicken! Chili-crusted calamari marinated overnight and served with a light chili sweet sauce was enough to bring me back in, but the braised goat belly marinated with coriander and cumin and topped with mint greens and a squeeze of lime was enough to make me a full-fledged convert of Alexander Ong, Betelnut, and anything they might want to serve me. There were glazed pork short ribs with Thai basil and a blend of garlic, crispy cauliflowers that I swear were part of the popcorn family — even vegan dumplings were invited, and with firm-pressed tofu, charred corn, pea tendrils and fried shallots, they were a welcome addition.

Sensory overload! To prepare us for the chicken our Chef sent out a watermelon salad sprinkled with citrus-mint dressing, bits of orange and watermelon granité married to the luscious pink squares by the Reverend Sea-Salt. That could have done it. Literally, I could have gone to sleep right then feeling like I accomplished something.

This whole time our service was competing with the food for Best Thing Ever. Not only did we not suffer the dreaded half-drought but our plates and even silverware and chopsticks were constantly being removed, replaced, and so on, ad infinitum. They must have eight dishwashers in that kitchen.

By the time I got done filming the reemergence of our chicken into the world our server had returned with an entire bar’s worth of food. Only this bar was topped with ingredients for a unique Vietnamese dish served in Hanoi – and only in one place in Hanoi. Mr. Ong recently made a trip to this exact destination – which only serves this one dish, incidentally – and came back with an edible treasure. This was my favorite part of the whole experience.

It’s called “Cha ca la vong” when it’s all put together. It’s prepared tableside though to integrate the fresh herbs – cilantro, dill, scallions, and Thai chiles, along with peanuts – with the tender but firm rice noodles. This was all mixed in a bowl with Californian sea bass coated in tumeric and nuoc cham sauce and then placed on the table. In Hanoi a separate pot on the bar rages with fire to cook the white fish, but unfortunately we have Fire Marshals here in San Francisco. It was already a Hollywood production, though. I didn’t need the screen to catch fire just to prove the food was authentic. It spoke quite clearly for itself.

The Szechuan green beans are legend, and jasmine rice, like a champion, balances everything out. There was one more thing though and it was everyone else’s favorite: Javanese chili prawns soaked in rice and coconut milks, lemongrass, ginger, Thai basil and a spicy kaffir lime sauce, mixed with the rice or eaten alone, oh my! It was time to go home.

But when another round of plates was collected yet another was produced, and we sat just a little anxious now at what might come out of the kitchen. It could have been anything. Could we eat more? We knew we’d try.

That’s when we found out how good the espressos and cappuccinos are. Betelnut also offers a coffee parfait, which normally I would throw myself at, hands and knees, but I was not bold enough to go beyond the espresso. Dessert, without doubt, was on its way.

Try the mocha chocolate lava cake if you like the way it sounds. It’s much better than that, too. Richer, creamier, and with more explosion! It’s served warm (gasp), with homemade strawberry ice cream and a chocolate chip cookie. If you like tapioca, go for the coconut pudding. It has a delicious surprise at the bottom. Want something lighter? The Hiromi Red plum sorbet is smooth, elegant, and just the thing to end off the meal of a lifetime (or the meal of a month, or the week).

We were offered warm towels with fresh lemon slices to cleanse our hands, but the food had already achieved a similar effect on my soul. Does this seem over the top? It was.

Betelnut is a slamming hangout at night, too. Fortunately, we went during lunch and did not feel compelled to rush out of our luxury booth. Instead we enjoyed the warmth of dim orange and red lights against plush leather seats and bamboo dividers while our minds, no less than our bodies, began to digest. We had found a new favorite restaurant.
Betelnut is located at 2030 Union Street. You can make reservations @ 415 929 8855 or even here.

Watch the cracking of the Beggar’s Chicken and the Cha ca la vong and read more of my writing here. 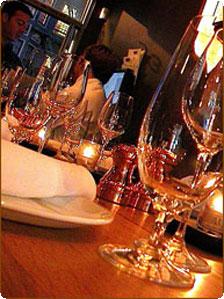 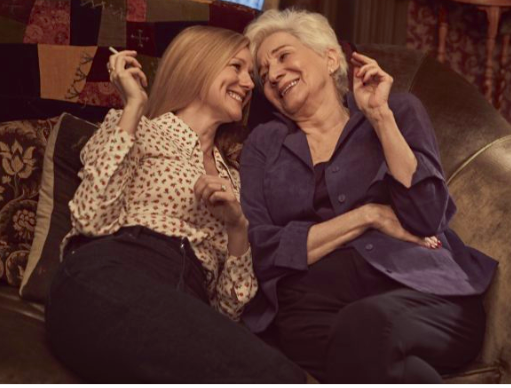