Again, the critics were right-on! (Not too suprising, since I have the highest respect for the SF Chron’s Michael Bauers’ taste buds.)

For weeks I have been meaning to try Poleng Lounge, but kept putting it off because I was unsure how good the food could be in hybrid restaurant/lounge. But when I read M.B’s second rave review that ended with the words, “After five visits, there’s not a single dish I wouldn’t order again,” I simply had to try it.

I knew the place would be packed after this proclamation, but at the obscenely uncool 6:00 dinner hour, we were able to be walk right in. We were warmly greeted by the hostess who quickly changed our table when we asked for a seat closer to the fireplace. The extremely hospitable service continued throughout the night. (Our attentive waitperson even offered to wrap up the marrow bone for me to take home to my dog.)

Looking around the restaurant I kept thinking of the Faye Dunaway’s scene in the film Chinatown, “She’s my sister…daughter…sister…” It’s a restaurant-slap..nightclub-slap….restaurant-slap.” The place reeks of coolness, yet manages at the same time to provide a warm Balinesey/Zen feeling with it striking waterwall, and the artistic driftwood poised over the bar –– which is heaped with colorful piles of tropical fruits that the bartenders muddle into exotic cocktail combos. Overhead, a montage of gorgeous pictures (taken by the owners on their travels throughout Asia) scroll by on the large plasmas in Discovery Channel caliber slide show.

Executive chef/owner Timothy Luym is still in his 20s, yet brings such a level of sophistication to his spin on Asian steet foods, that he must have started cooking at the age of 5. His palate reflects his Chinese/Spanish heritage, his childhood in Manila, his extensive travels throughout Southeast Asia, and his time spent cooking at Charles Nob Hill and Fifth Floor.

It would be a shame to order wine here. Stretch your wings and try one of the unique tea infused cocktails. My tastebuds got their wake-up call with the Lady Boy: Wasabe Vodka, Crushed Ginger, Sparkling Soda, and dash of Black Tea, after which I ordered one of the sake flights. ( I did spy a “60-oz. glass filled with “your favorite elixir” on the lengthy drink menu, but had to pass since I was driving!

Some of my “you will kick yourself if you don’t try them” dishes are the deliciously sticky mess of Crispy Adobe Wings (simultaneously sweet, hot, & garlicky) which went beautifully with the even garlickier crab noodles that were loaded with crustacean nuggets. Poleng’s impeccably seasoned salpicao (seared flank steak) was plated with a poached bone marrow, a tangle of frizzled onions, a stack of toasted coconut bread and mango salsa, which when put together made the most scrumptious lil’ sandwich bites.

Unfortunately, I had no time for dessert, since I wanted to get home in time to watch PBS’s second part of Jane Eyre, but I will so be going back in a New York minute. 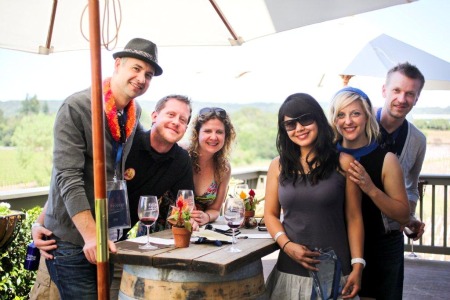