Pretty ballsie play –– to write up the year’s best meal when we’re only three weeks into 2007. But I gotta tell you –– I’m feeling pretty confident here. I was in Bali over the holidays. An island known for its beautiful women, dependable sunshine, numerous temples, silver jewelry, colorful batiks, etc… but hardly for its gourmet food.

After some silver jewelry power-shopping, a brief two-hour massage, and a late siesta, I barely had time to change for dinner. My expectations were high-after all, Mozaic is the ONLY restaurant in Southeast Asia to be recognized as a member of ‘Les Grande Tables Du Monde’ (The Grand Tables of the World), and Chef/Owner Chris Salans had worked alongside both New York’s David Bouley and Thomas Keller at The French Laundry in Napa Valley.

So even I can’t believe it when I tell you that dinner at Mozaic Restaurant Culinaire in Ubud was one of the best meals of…. hmmmm… probably my entire life.

My tummy’s full, but I’m not particularly happy, as a matter of fact, I’m quite cranky. I just got back from trying the new restaurant in the Presidio, Pres a Vi. Living in San Francisco’s Marina area, I am thrilled they are finally opening some restaurants in the Presidio, and this is one BIG restaurant (must seat at least 200) with a lot of money behind it– but what part of hiring a decent chef was not in their budget?????

Ok, back to more pleasant memories…oh yes, Mozaic. As I said, I went with high hopes. Not only because of Chef/Owner Chris Salans impressive background, but also because last year Mozaic became the first restaurant in Southeast Asia to be recognized by the prestigious Tradition et QualitÃ© Association as a member of ‘Les Grande Tables Du Monde’ (The Grand Tables of the World), joining famous restaurants such as Le Louis XV and Plaza AthÃ©nÃ©e (Alain Ducasse), Guy Savoy (Guy Savoy) and The French Laundry (Thomas A Keller). Remarkably, Chef Salans or his Pastry Chef, Francois Seurin, have worked with all of these.

The restaurant “had me at hello”… or at least the second my taxi pulled up to one of the most exquisitely dramatic restaurant entrances imaginable. All the more surprising since, in a former life, it was a meditation center. The magic continued once I entered Mozaic, and was seated on the veranda, hypnotized by the babbling brook, verdant rice fields, towering banana trees, hundreds of twinkling candles; all delicately perfumed by the surrounding jungle of tropical flowers. (Listen up, guys: If you’re getting ready to pop the big question, there’s no way she could say no in this romantic setting)

The menu, which changes daily, consists of two six-course Chef Tastings. I couldn’t decide between the “Classic Cuisine”, a modern spin on traditional dishes, or the “Experimental Cuisine” offering a more innovative approach with unusual flavor combinations. So I was thrilled when Chef Chris came out to meet me and asked if I trusted him to prepare a special tasting for me.

And from the minute the impeccably trained wait-staff, brought me a flute of Champagne and brought a basket of piping hot rolls flavored with bits of seaweed, I knew I was going to be a happy camper.

Course after beautifully-plated course arrived, and after each bite I unconsciously let out a contented little “yum.” Particularly noteworthy: The Crispy Seared Fois Gras in a trio of Mango; Puree, Candied, and Chip; the Pyrenee Mountain Baby Lamb with red cabbage with a totally addictive topping of crunchy red pepper/palm sugar brittle.

As overdone as “foams” are in many high-end restaurants, the Peach Lemon Verbena Sorbet achieved perfection when served with a bittersweet Guinness Foam.

When I asked Chris how he described his restaurant, he replied, “It’s a compilation of a Balinese garden, a French American Chef, Asian flavours, Indonesian ingredients, French and American techniques of cooking and presentation, with international service done by Balinese waiters.”

Just what I was going to say! Now, thinking back about Chris’s dinner has my stomach growling so am taking a break to run out for dinner. Hate to write on empty.

(Chef Chris is shown on the right in the photo above.) 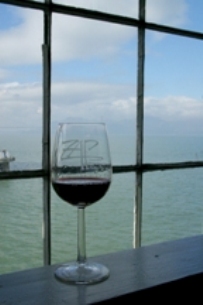 The best thing about January is it’s time for the ZAP festival::SF 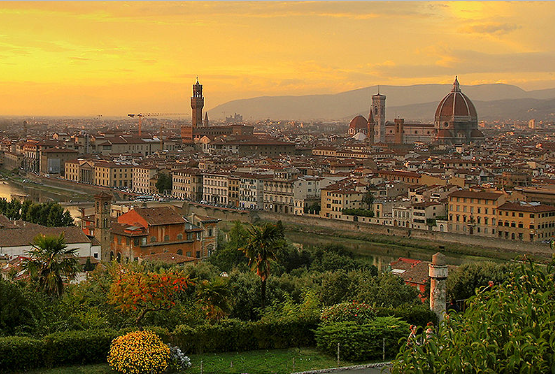