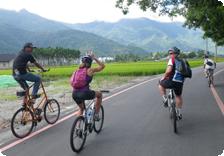 What started on my own, ended up with 4 new friends and memories of a surprisingly stunning and peaceful travel destination. Leaving my usual travel companion – my husband – behind to travel to the annual Taiwan Cycling Festival and see what else this island had to offer. I fell in love with riding through the country that’s more known for manufacturing bicycles, than using them. Locals call Taiwan “Formosa” whose direct translation appropriately means “Beautiful Island”.

Even though 2 weeks here were somewhat rushed with a new location per day, and a detour thanks to a typhoon, (yes it did rain a lot, but temperatures were very pleasant), my impression is such of a beautiful and culturally rich paradise, that I most certainly am returning for more.

TRANSLATION
Like the Eagles sing “City girls…know how to open doors with just a smile”, you don’t have to speak Mandarin to communicate or connect with locals. I had some anxiety going to an area where the alphabet looks like artwork to me, and the inability to read signs or use a dictionary to translate written language worried me. To my relief, English is prevalent on most signage alongside the Hokio Taiwanese. Like many, I make a habit of learning at least basic phrases in any local language I’m visiting. In Taiwan, a simple “Ni Hao” produced the big bright smiles daily. This simple phrase translates to “Hello”, “How are you?” or “Good Day”. Yes there are multiple ways to speak the phrase – emphasis on NEE, or a long smooth HOW… but it didn’t matter. The locals appreciated my effort, and I thought they’d hug me for trying so hard which is saying a lot, as they aren’t a touchy feely culture. European style cheek kisses are not the norm. With that said, I always felt safe and taken care of, if not protected, and welcomed as a female tourist for the entire 14 days there.

GETTING THERE
I arrived in Taipei feeling like an origami folded body clumsily exiting the airplane. Typical of any crossing-the-pond flight, but always worth the haul once you arrive at your distant paradise! Normally I would turn my nose at hiring a guide, but now I think it’s the most amazing benefit while exploring an unknown land. I suggest trying this inexpensive luxury.

The trains are clean and efficient, buses modern, and bicycle infrastructure for touring is mind blowing! A van or small bus for even longer transfers seemed to be nicer than the formidable buses that were at all destinations. These colorful behemoths were clearly the more local choice for travel. There are few cars outside the cities, which were crowded with scooters, motorcycles, and bicycles anyhow. What I’m saying is I don’t suggest renting a car, but to hire a van or bus with driver!

TAIPEI
I am a bit of a novice when it comes to city tourism, but I find them stimulating and invigorating. Taipei is no exception; it was bustling, clean and rich with varied architecture. This journey started with a visit to an immense and iconic monument to Chiang Kai-shek, who ruled Taiwan under martial law from 1949 to 1975. I found myself emotional in my sleep deprived state. I’ve awoken in a place very surreal to my normal reality. When I say these buildings of marble were large, it’s like saying the Grand Canyon is big. In a city of small people and compact rooms, buildings crammed in like NYC, you arrive at a colorful park with strikingly clean marble, steps that rival a pyramid’s, and colorful roofs that contrast the unreal green grass and plants. This was the perfect way to transition into this land I hadn’t researched historic facts before depaerture. I thought, “now you are in a new part of the world!” While in Taipei, soak in a 360 degree view of the city and take a ride up the worlds fastest lift, to the top of what was once the world’s tallest building at Taipei 101. A trip to the night market is a must. The busy bustle of locals displaying their wares, local cuisine, is open late.

CYCLING FESTIVAL
– TAITUNG COUNTY
Our group left Taipei on a short flight to Taitung on the East Coast. I was now with strangers quickly becoming friends, ready to observe and experience the Taiwan Cycling Festival and the country’s Utopian bicycle paths. A collaboration of the tourism board, transportation department and cycling advocacy organizations proves to be immensely powerful in Taiwan. This unified effort is how they could accomplish such a lengthy, connective path system. Taitung’s slogan is “Biking Heaven.”

This city boasts the first, and quite famous, bike path completed. The paths will eventually circumnavigate the entire island! 2011 is on the tail end of a 4 year plan and 4 billion dollar investment to build the infrastructure needed. (Yes, I just said 4 BILLION dollars with a straight face). This landmark, the original path, even has tolls for the tourist or passerby (locals can use for free). You’ll ride through terraced rice fields, under trellises, near small villages, in the backyards of local farmers. Bathrooms, parks and cycling stations are spaced a handful of kilometers apart, making it an easy level for beginners and enthusiasts to take in the landscape.

Our accommodations were first in a canyon that boasts natural healing hot springs at the Royal Chihpen Hotel. I have to admit I didn’t get to enjoy it in my jet-lagged state, with late arrival and early departure. What I did use was the Japanese-style soaking tub with actual spring water piped into each room’s bath, quite lovely! The second location that we actually rode to and from, was the gorgeous Papago Resort. I was able to enjoy the beautiful pool, and over-sized modern, bright and beautiful room there! If you like water like I do, you might enjoy a raft trip! We took a simple float on bamboo, flat Tom Sawyer-esque rafts, to get our feet wet, it was a lot of fun. We left via a van, to drive North along the lovely coast to Hualien.

TAROKO GORGE National Park
Hualien sits on the ocean, but its main attraction is a do-not-miss National Park. This marbled canyon of tropical fauna and steep breathtaking views is the all time favorite for me of the entire two weeks. Rent a bike from either Silks Place where we stayed one night, or near the gate entrance from the Hualien side at a Giant Bicycle Station. I suggest a bike ride through the tunnels and S-turns early in the morning before the double-decker buses take over, or just take a side hike. Staying in the Leader Hotel is more like a quiet serene lodge. You’ll be immersed in nature, possibly see monkeys. I had to be dragged out of there, as I wanted to breathe it in, sit and watch the low clouds change the landscape every few minutes. This has to be one of the most peaceful places on earth. 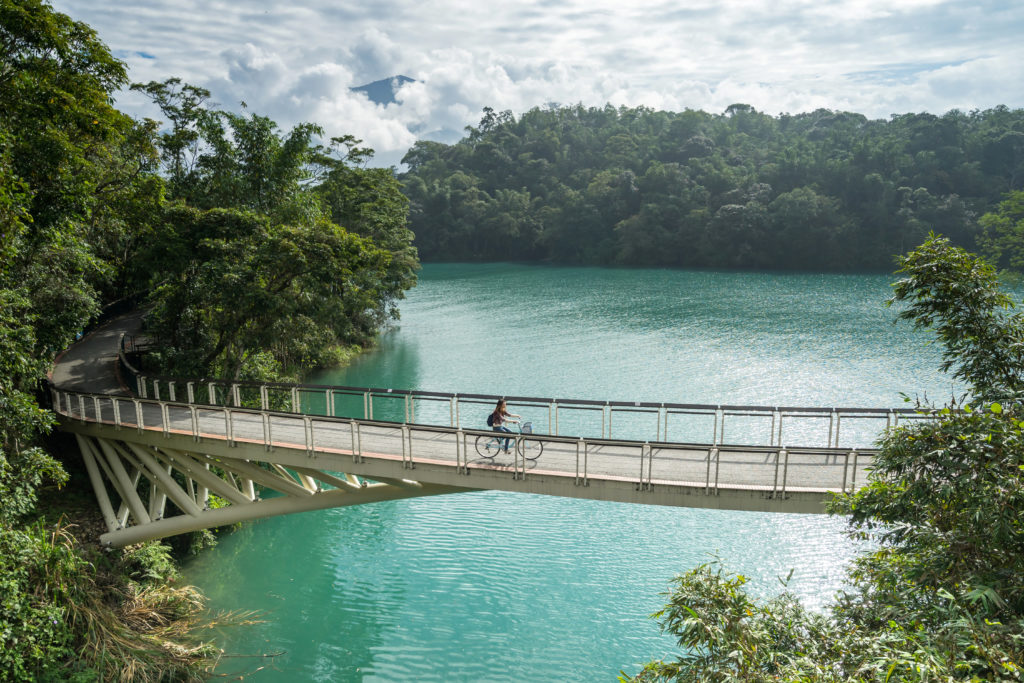 Sun Moon Lake
Our timely typhoon changed both the Cycling Festival plans, and our original itinerary. We were rerouted inland to a lake in the middle of beautiful mountains with colorful water. This proved fortuitous. Ride a bike or perhaps rent a scooter for a fun loop around the 33km meandering Moon Lake Road. Stop at the Ci Hen Pagoda and hike up the 700 meter path to capture the view from the top – where you can ring the bell. Apparently this is a perfect location to spot the annual appearance of fireflies as well. We were put up in one of the newest and highest end hotels there, and I imagine other accommodations have the same stunning views, at maybe a lesser “gold leafed elevator” price. But I can say, with heartfelt appreciation for the rare luxury, the outstanding service and food and room amenities, perhaps for a special occasion, do consider staying at The Wen Wan if you can swing the $700 room price tag (for a junior deluxe room). Small lakeside villages host dance recitals and markets and have interesting dining options.

It must be a great sign that when you look back on a trip, or start to share stories you exhale first, and sigh. I can tell I only skimmed the top of what there is to explore, however I’d repeat any of the locations and all the hotels. May you all add Taiwan as a destination on your must travel to list, and exhale in perhaps a place like Taroko Gorge, knowing how lucky you are one of the few that got to see it!

Beverly Garrity is a cycling skills coach, traveler, marketeer and designer who likes espresso, and sometimes writes about it all. Deeper details on her Taiwan trip can be found at http://bevcycle.blogspot.com/