Picture yourself on a long stretch of white sand beach. You’re carrying your brand new Gucci tote and you’re enjoying an aperitif while watching the sun set over the ocean. Checking your watch, you realize you need to leave for your dinner reservation at a chic restaurant owned by a famous chef. No, you’re not in the south of France or on an island in Hawaii. You are a mere two and half hour drive south of Manhattan in Atlantic City, New Jersey.

Surprised? Atlantic City is undergoing a revolution. It is no longer a collection of black jack tables, slot machines, and buffet restaurants lining the south Jersey shore. While hanging onto its classic hometown favorites, Atlantic City is bringing world class shopping, dining and resorts into the mix, yielding a unique and charming combination of old school nostalgia and contemporary luxury.

Although I grew up in California, both my parents were raised in Atlantic City. As the saying goes, they have ‘sand in their shoes,’ meaning they love the Jersey shore. Therefore, my family returns every summer to Atlantic City. The result is that I have ended up with quite sandy shoes as well and I know how to enjoy myself in Atlantic City without ever reaching for the slot machine lever.

If you’re ready to whip out the plastic, The Pier at Caesars is the place to do it. Currently only in soft opening, The Pier will be a mall of Las Vegas proportions. Built on a pier extending out over the ocean, Gucci, Louis Vuitton and Burberry are just a few of the boutiques that will grace The Pier. Also scheduled to open, IT’S CREAM will put Ben & Jerry’s to shame by offering almost 300 flavors of ice cream. Jeffrey Chodorow’s Rum Jungle will serve tropical drinks and food to guests enjoying the outdoor dancing terrace with an ocean view. And if shopping, dining, drinking and dancing were not enough, you will also be able to get married at The Pier’s wedding chapel. And like its Las Vegas counterpart, Caesars Forum, The Pier at Caesars will have an indoor water and light show.

If your credit card can’t handle the decadence of The Pier, the Atlantic City Outlets, also known as The Walk, are just steps off the boardwalk. Opened less than two years ago, outlet stores from Banana Republic, Ecco, Coach, Guess and even Borders provide excellent bargains which are augmented by the fact that there is no sales tax on clothes in New Jersey. The Walk is decorated with an interesting touch of Atlantic City history in the form of plaques featuring portraits of, and facts about, every woman who has won the Miss America Pageant since the competition started in 1921.

When you’ve worked up an appetite shopping, the Borgata, Atlantic City’s biggest and newest casino resort, has just opened three new celebrity chef restaurants. Bobby Flay, Wolfgang Puck and Michael Mina have taken their expertise from the Food Network and set up shop in Atlantic City.

Or, if you’re in the mood for some local flavor, Tony’s Baltimore Grill is just a block off the boardwalk at the corner of Atlantic Ave. and N. Iowa Ave. My parents used to hang out at Tony’s when they were in high school in the 60’s. Now my brother and I frequent the spot for its fresh, fantastic Italian food. Slightly further from the casino area is the Atlantic City institution, Sack O’ Subs. What looks like a hole in the wall sandwich shop on Ventnor Ave has been doing a booming sub business since 1969. I recommend their meatball sub with hot peppers; it’s Heaven on a loaf of Italian bread. We’ve made a tradition of swinging by Sack O’s before our flight home so we can carry a taste of Atlantic City with us on the plane.

Of course the most important feature of Atlantic City is what drew tourists to the shore long before the casinos, stores and restaurants: the beach. The whole coastline of Atlantic City has sunny beaches with warm summer water and nice waves. To escape the crowds from the resorts, walk south along the boardwalk until you reach Bartram Ave. beach. Quiet and populated only by locals, Bartram is the best beach in town to spend an afternoon tanning, boogie boarding and eating ice cream bars sold by roving vendors out of ice chests they carry on their backs. If you’re there in the summer, keep your eyes open for a blonde Diva reading a book on a beach towel because Bartram is my personal beach of choice.

In the 21 summers I’ve spent in Atlantic City, I’ve watched the city change and grow exponentially. To encourage people to sample all the city’s venues, the first Wednesday of every month brings discounts at shops and restaurants all over town. New additions like the Pier are bringing big city elegance to the shore without displacing the hometown favorites with which I grew up. So leave the gambling floor behind and explore all that Atlantic City has to offer without making a direct deposit to Donald Trump’s bank account through a slot machine.

Culture: Balinese Eclipse of the Heart 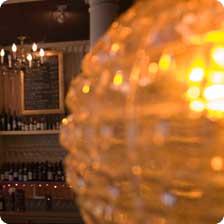