Along with my teacher and classmates

A Hidden Sanctuary At Sanre

An old part of town

Matt as an Italian Chef

Along with my teacher and classmates

A decorated street at Festa

I had packed up all my possessions in San Francisco, abandoned my apartment, quit my job, ditched my cat with my parents and boarded a plane for Europe. The nervous breakdown occurred about ten minutes into the flight. After a glass of water, a Valium and my boyfriend’s reassurance that we were not in fact crazy, just adventurous, I remained composed until the very night we found ourselves standing outside the door of our apartment in Sanremo.

Partly because it was a strange foreign city and partly because I seemed to worry endlessly, the butterflies in my stomach fluttered and I almost regretted signing my boyfriend and I up for seven weeks of intensive Italian classes in a country where the culture differed so greatly from that of the U.S. and in a city that I knew absolutely nothing about.

In fact the city of Sanremo seems lost amongst its other glorious counterparts in Italy. It doesn’t ooze the dignified elegance of Rome and Florence. Nor does it harbor the pleasurable charms of Lucca or Perugia. Once a booming resort town that saw its peak in the mid 19th century, it now seems stripped of its luxurious status. Its once stately buildings that still line the prestigious promenade are now crumbling, weeds crawling over the worn and cracked stones.

The smell of garbage and sewage creeps along the narrow alleyways and back roads long since forgotten by wealthy, suntanned tourists. Yet still the expensive designer shops are interspersed throughout the main street lined with palm trees and colorful tropical flowers, almost so much so that you might for an instant believe you were in Honolulu. And with the arrival of autumn you are bound to gaze upon the local elite ladies strolling along the water’s edge adorned in their lavish fur coats.

Even so, it still seems like a city beset by the reality of lingering wealth clinging to a town that has become overtaken with the decay of time. Yet there would be no turning back at this point, and with a turn of the key we entered our new domain atop the fifth floor of an apartment building on a busy street and put down our bags.

My Italian skills before I arrived in Sanremo were somewhat minimal. I could form tenses thanks to a year of Italian in college and my four years of Spanish in high school. My vocabulary though was profoundly limited and the harsh realization came the very first day at Omnilingua language school. Not one word of English was spoken during the whole four hours of class, and I sat there in a daze as small Italian words floated in and out of English sentences in my brain.

It didn’t help that most of the other students in my class were well ahead of me in the comprehension of the language as well as in conversation. I nearly suffered another nervous breakdown at the end of the week.

Interestingly enough it was Matt who offered the voice of reason, again. He was struggling even more because he had absolutely no prior experience in Italian. “It’ll be a challenge,” he said, “but I think it is important that we stick with it.” And although grumbling, by the following week I found myself in class once again, clutching my little yellow English/Italian dictionary, determined to learn.

Over the next couple of weeks I found myself becoming more comfortable with my babblings of nearly incomprehensible Italian phrases complete with an American accent. I was becoming a master of the phrases, “Ho capito,” I’ve understood, and “non ricordo,” I don’t remember.

Every night I studied, and slowly small phrases turned into complete sentences. The day I heard myself explaining the current political situation in California all in Italian, perhaps not fluently but nevertheless somewhat comprehensibly, to my fellow classmates, I decided that in fact the classes were finally paying off.

Matt and I strived to practice our newly found Italian skills in our everyday lives, and being that English is rarely spoken in Sanremo, every time we ventured outside was a new opportunity to converse in the Italian language. We became regulars at a small café near our school and would sit outside sipping tea and cappuccinos spending hours refining the art of doing nothing.

The owner of our local market, just down the street from our apartment, always treated us with freshly baked foccacia, and it was these small occurrences that finally made me feel at home in this funky little city. On weekends we took trips to Monaco, Cinque Terre and Piedmont taking in the marvelous sites of the Italian countryside and the expansive European coastline.

But really it was the people who waltzed in and out of our lives during these seven weeks that gave us a special glimpse into Italian culture and festivals. One day towards the end of October a group of us, all students from Omnilinga, ventured out to the Festa della Zucca, a pumpkin festival in a tiny medieval village in the hills near Sanremo.

We ambled through the storybook streets and marveled at the brightly colored autumn artwork and carved pumpkins adorning the walls, all contributed by the local school children. We drank wine, ate riso di zucca and pumpkin gelato, though I strongly discourage the latter, and conversed through our broken Italian, traces of English, German and French words breaking through.

Although Italy is not notorious for celebrating Halloween, we all decided to attend a “party of witches” high up in the mountaintops in a town called Triora on Halloween night. Famous for its imprisonment and subsequent burning of people who practiced witchcraft, this already mysterious and isolated little town sent chills down my spine thinking of its gruesome past. The narrow cobblestone streets and dimly lit candles…complete with a full moon was a far cry away from America’s suburban sprawl of plastic skeletons and raging parties. It all did seem miles away from the ordinary.

As our seven weeks in Sanremo drew near a close, I realized my initial outlook on the city had changed. Where there was once a dirty street carelessly littered with garbage, now I saw our favorite wine bar standing tall beside it. Where the endless steps up a narrow pathway once left me cursing when I would reach the top, I now recognized that I was almost to our home. Sanremo may not be perfect, but neither is my Italian.

“In bocca al lupo,” is a common phrase in Italian, similar to that of the English phrase: “Break a leg.” And when an Italian raises his glass to you and exclaims this phrase, you are obliged to say: “Crepi!”—He (the wolf) will drop dead, meaning you will succeed and your fears will be suppressed.

Such was the occurrence when on the last day of class the director of the school came in, presented me with a certificate, a bag of cookies, extended his hand and said, “In bocca al lupo.” Now I may still have an American accent, I still can’t seem to pronounce the word: “bottiglia” correctly and don’t ask me what the capital city of Umbria is, but I can tell you confidently that whatever second thoughts and fears I initially had when I arrived in Sanremo were now obsolete.

With a smile and an aura of renewed confidence, I shook the director’s extended hand and exclaimed: “Crepi!”

For inquires about classes, email them at: infos@omnilingua.net 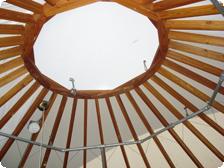