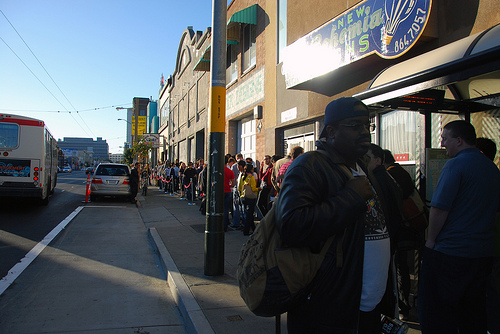 I recently had the opportunity to attend the West Coach coast launch party of gdgt.com I had a great time! I was particularly excited to attend this event because lately, I’ve put aside my fashion obsession (pfft momentarily, natch) and have become such a tech geek. I have been on the lookout for the latest and greatest in all things travel tech gear to sustain me through the 5 week-long El Camino de Santiago trail in Spain I will be embarking on next month. I’ll be live-blogging, tweeting and posting pics & videos daily… trouble is, I just need to find the best gear to do so!  (BTW-if you’ve got the scoop on anything, let me know!)

I arrived at the event just before 6:00pm, so I could have a full hour with the goods before the masses were allowed in. The doors weren’t set to open until 7:00, but the line was already stretched to the end of the block. Oh, how sweet the promise of free swag and giveaways can be. And judging from the conversations going on around me, it seemed like everyone who was anyone in the tech blogosphere was there. A new product was being launched that night, so the muscle working the door made a big show of acting like extra security was needed. When he got to me and saw that the most offensive thing in my bag was my circa Zack Morris phone, he could barely conceal his smirk.

Upon walking in, the start of a great night was nearly ruined for me when I inadvertently broke my favorite pair of vintage sunglasses. Luckily I didn’t have much time to mourn my loss because I was immediately handed a gdgt.com T-shirt, swag bag and a drink ticket. Result! The people of SanDisk had the luxury of being placed right by the door and therefore immediately had my rapt attention. We first chatted about the SanDisk Ultra® Backup USB Flash Drive—wow! It’s a USB flash drive with a backup button, meaning it backs up your data without cables or software installation needed. It can be a valuable option for travelers away from their home computer. Just an FYI- it’s not Mac compatible. Another cool feature from SanDisk is the SanDisk microSD memory card. It stores documents, photos, music and videos on your mobile phone—a quick and easy way to turn your phone into a mini-computer, camera and MP3 player. Cha-ching! Money saver. It works with any mobile phone that has an SD slot—75% of
phones do. Great for students, business people on the go and travelers alike.

I next sauntered over to the Sony table. I was on a mission. Quite simply, I need a DSLR camera to become my official, Tango Diva-Photojournalism approved camera that will illustrate all my travel articles. I’ve had my eye on a certain DSLR for quite a while now, but have yet to come to a decision—and time is running out. My friend raves about her Sony-T900 camera, so I was interested in checking out a DSLR from Sony. My photography skills are above the beginner level, so the Sony A330 felt really comfortable in my hands and appears relatively simple to use—ideal for amateur photographers who are serious about improving their skills.

I plan on blogging from the trail daily, but will sadly be leaving my precious Ruby Soho behind. When every ounce counts, I can’t exactly justify carrying around a full-sized laptop on my back. Though likely bucolic and aesthetically pleasing, I’ve been a little concerned thinking about the possible lack of internet cafés in rural, Northern Spain. With that in mind, I can only imagine the sound that came out of my mouth when I saw the Sony VAIO P was of the porcine variety. Who knew such a tiny computer could exist?! If you’re a traveler who needs a laptop for makin’ the money or have an online job (like this girl), this is a really cool, lightweight option to help keep you connected. I picked it up and played around with it for a while and it couldn’t have weighed much more than a pound or so. The guys also informed me that it comes preloaded with a bunch of cool features like GPS, Windows Vista and can receive a wireless internet signal from your cellphone. Success! Ah, the smartphone. I continue to vacillate between all the worthy options available. I was really looking forward to comparing and contrasting the crème de la crème of smartphones out there. I was disappointed to learn that there would be no Apple representative at the event. As a Macbook owner, the iPhone 3GS is a natural choice, however the neatfreak in me is concerned about the smudging on the touchscreen. Since I will most likely be doing the majority of my blogging from the palm of my hand, the full QWERTY keyboard and slim, lightweight design of the RIM Blackberry Curve 8900 really impressed me. Also the built in GPS is convenient for the traveler (ie ME) who is forever getting lost. I wouldn’t have to worry about getting lost on the trail or carrying a map!

I also played around with the cute T-Mobile Sidekick LX™. It has all the standard features of a smartphone that I am looking for, including built-in social networking apps—I’m addicted to Twitter!—but I especially loved the digital postcards you can send as text messages. Call me old-fashioned, but whenever I travel, I always send several postcards. I love ’em! Perhaps the Sidekick LX™ would help bring me into the 21st century? My only concern is that the network coverage may not be compatible in Spain. Further investigation is needed.

I missed checking out any of the HTC phones…. would appreciate if anyone could fill me in!

For the frequent traveler, I also think the TeleNav voice GPS services is worth checking out. Compatible with most wireless carriers and smart phones, it provides you with over 10 million listings and reviews, traffic and weather alerts… it even tells you where to find the cheapest gas! I am in dire need of picking up an external hard drive… I’m quickly running out of memory space on my overworked MacBook! To the best of my knowledge, the external hard drives from Western Digital are the most trusted and respected out there. I really liked how WD has external hard drives specifically designed and programmed for Mac users. However, they all can be formatted to be Mac compatible. In addition to needing to free up some room on laptop, I also likely won’t have it with me on the trail. So l need to find a way to store my photos and documents in a safe place. After chatting with the knowledgeable rep and learning that her friend is currently on a Round The Word trip and swears by his WD external hard drive, I was convinced. However given the uncommonness of Macs in Spain, I may need to go with something like the WD My Passport Elite.

All in all, I had a great time at the gdgt.com launch party and everything flowed seamlessly. Congrats to the founders of gdgt.com—we wish you success! Would have loved to chat with the boys though. Also, props to the organizers and promoters for making sure it was a rousing success and everyone was having a great time. I’m so glad I have a better understanding of some of the tech gear out there for the traveler. Now… it’s decision time!

Solo “Fun on the Fly” in Yellowstone

Give Back: Gifts of Compassion celebrate the art, culture, spirit and vision of Africa