The Princess of Wales waits at the harbor early in the morning on an uncharacteristically warm March Saturday. After a week of rain and dreariness, it is 52 degrees, and sunny. A cerulean sky gazes down at the brigade of boats bobbing in the water. Chunky cumulus clouds bumble around the horizon, all midwestern majesty and no menace.

We are an excited crowd as we walk the plank at Moss Landing, greet the boat’s crew, and hop aboard. The majority of the passengers step up to the top deck. We chatter, laugh, and take pictures of each other at the stern. Although most of us are adults, the barely contained excitement rivals the frenetic energy of a line of prekindergartners at the jungle cruise ride at Disneyland. But Sanctuary Cruises has offered us the possibility of real whales, not plastic, motorized animals. We conjure up our sparse whale knowledge, joke about how we will speak Whale à la Ellen Degeneres to lure the mammals closer to the ship. A few of us have taken the recommended dosages of Dramamine and are noticeably less expressive.

Not five minutes into the trip, our captain Steph introduces himself over the microphone and points out an otter, port side, who floats by on his back, snacking on the brunch on his chest. Whiskers glistening, paws working at his crustacean snack, he is a good omen. We feel lucky. We train our eyes on the green water, scouring it for signs of whales.

As we head further out to sea, Captain Steph shares some whale facts. He assumes that we don’t know much, and he is right. In March, we are likely to see California gray whales, dolphins, and killer whales, although Steph notes that there have been recent humpback sightings, which is unusual for March.

Humpbacks are one of ten species of baleen whales that use comb-like structures to filter their diet of small fish, krill (crustaceans), and tiny organisms. Baleen whales are bigger than toothed whales and have two blowholes, or nostrils, instead of one. They are part of the suborder Mysticeti, which seems an apt nomenclature for a creature who evolved millions of years ago. Humpbacks travel over 3,000 miles during each seasonal migration, with little rest along the way. During migrations, they can cover as much as 1,000 miles per month. They mate and calve in tropical waters during the winter, then move to cold polar waters during the summer to feed. They reach maturity at age 15, and can live as long as 45 to 50 years.

As time passes, the passengers’ energy wanes a bit. People uncurl their hands from the railing, lurch to the metal seats, and let a calm descend upon them as they continue to scour the ocean for whales. A few heads and eyelids droop. Bodies move with the swells, trying to find the rhythm of the sea. Back and forth, up and down, up and forth, back and down.

But not everyone has found his or her sea legs, nor is everyone’s silence a result of whale surveillance. One by one, folks stand, mumble something about the seasickness Relief Bands that are available for rent down below, and weave and pitch their way down the stairs. A few stalwart sailors return to the top deck, sporting the Relief Bands that resemble wristwatches. The bands, which were designed by NASA for airsick astronauts, emit electronic pulses of varying degrees, and most people have cranked their bands up to the highest level.

Captain Steph notes how we will change directions, try out another location. On the top deck, a few people pout like schoolchildren denied candy. Steph reminds us that whales are wild animals and therefore only semi-predictable. He cannot guarantee that we will see them. He seems to be talking a bit faster.

At last, Steph calls out in exultation. Two whales, starboard! And humpbacks, no less. His excitement is palpable and contagious. Those who remain on the top deck rush to the right side of the ship, watch the spume of two whales puff up from the sea. Slickery black backs arch from the water, followed by the tails, or flukes. The whales leave footprints, or smooth patches, on the water where they surfaced. Like oil slicks, the footprints remain undisturbed atop the water for several moments before dissipating.

Captain Steph turns off the boat’s engine, and the top deck waits for the whales to surface again. Again, we see the spouts of water rise up, followed by the curved back and the flukes. Other boats have noticed the show and move in closer, but The Princess of Wales has the best view by far. On the top deck, passengers ooh and ahh, snap pictures, and smile a little smugly, as if they have somehow charmed the whales into appearing.

An entirely different show is taking place on the bottom deck, and it has little to do with whales. It seems that the lower deck has collected the boat’s seasick passengers. Most of these people are seated, turning various shades of green, trying to contain the nausea. Several are lined up along the railing, vomiting without ceremony. The crew is sympathetic and very attentive: they alternate between swabbing the decks and passing out Saltine crackers to quell upset stomachs. One family has brought their child’s birthday cake onboard but the little girl can’t stop vomiting long enough to even consider it. Another nauseated passenger asks a crewperson whether this is normal. The woman nods and says, matter-of-factly, that usually about a third of the passengers get sick. She adds that there seems to be a higher proportion of nauseated people that day. There appears to be no rhyme or reason as to who will get sick and who will not.

After several sightings, it is time to turn the boat around and head back to the dock. On the upper deck, we joke about how the passengers can be divided into three groups. The Lower Deckers, who are sick, the Upper Deckers, who seem to be managing, and the Pirates, who, hours later, are joking, smiling, and cavorting as if they’ve ridden the high seas their whole lives. One Pirate, who has faced great whites in a shark tank and swum side-by-side with a proud mother whale and her calf, cracks open a Budweiser and regales his friends with scuba diving stories. Other Pirates ponder which enchiladas they will have if they can coerce their friends into stopping at The Whole Enchilada, a restaurant just down the road from the dock. Down below, the vomiting continues.

As the boat returns to Moss Landing, the Upper Deckers are all smiles. Stomachs rumbling with hunger, they chatter excitedly about whales using their newfound nautical vocabulary. As soon as the Princess docks, the green Lower Deckers wobble off the boat and down the plank to land. The two decks have had entirely different experiences.

Feet touch solid ground and queasy stomachs are soon assuaged. Upper and Lower Deckers are all suddenly hungry, and the group heads out en masse to the Mexican restaurant down the street.

With the nausea abated, conversation turns back to the whales. Many of the Lower Deckers saw only the whales’ first surfacing before succumbing to illness. Although it’s unlikely they’ll return to the sea anytime soon, they’re eager to see the pictures. The Upper Deckers feel lucky; they could be the unfortunate ones next time.

Down the road, an afternoon wind picks up, and the clouds shed their white opalescence and darken to gray. And whales continue to do what they have done for millions of years: swimming, feeding, and migrating – all in peace. We imagine them raising their tails up to wave goodbye.

Highway One and Moss Landing Road

Tango Diva Contributing Writer, Jennifer Anthony, loves to volunteer and travel. While her Little Sister (Big Brothers Big Sisters) is away on summer vacation, she will head out
to Vietnam to do some volunteer work with children in Hanoi. More
information about Jennifer can be found here: homepage.mac.com/jenniferanthony

Carmel California things to do 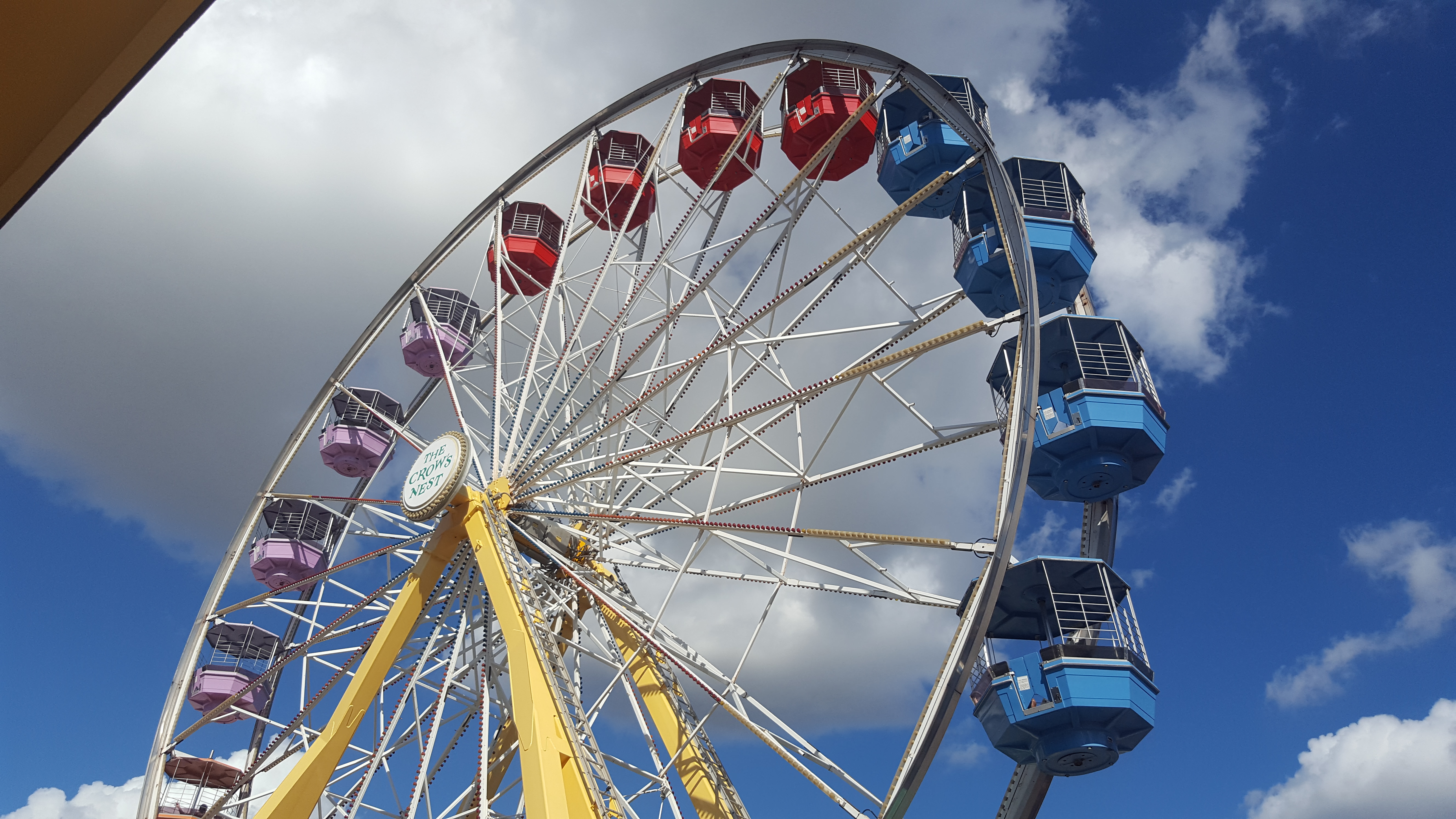