Wellness: Puerto Rico: Overcoming My Fear of the Outdoors

On my first trip to the Caribbean, I did something that I have never done before: fulfilled a New Year’s resolution. I had vowed to overcome my fear of the outdoors and to actually do the things that I had talked about doing for years. On my to-do list were kayaking and hiking.

Last summer, I traveled to Puerto Rico with two of my best friends. We all were in desperate need of a vacation, and Puerto Rico seemed like the perfect destination—there was something for each of us to do, and more importantly, it was a place where each of us could accomplish a personal goal.

I arrived in Puerto Rico on a Thursday afternoon, and while the rainy season had officially ended the first week of May, we experienced an extended version of it. According to many of the locals, rain was sign of good luck, and was embraced. The moment I arrived in San Juan, it began to rain, but that didn’t stop me from having a good time. I arrived at the Normandie Hotel, located in Old San Juan. The hotel, built in 1937, resembles a cruise ship. The hotel’s shape and its art deco style clearly reflect the architect’s goal of bringing a cruise-ship lifestyle and ambience to land.

While many claim that Puerto Rico is just another part of the United States, it’s not! You may spot a familiar KFC or McDonald’s, but the commonwealth is its own country with its own culture. Our first day, we ventured through historic San Juan, making our way through the crooked streets and admiring the colorful buildings and homes, whose flower-draped terraces provided numerous photo opportunities.

After enjoying our walking tour, we stopped at Café Bohemio. Once seated, we asked our waiter what he recommended. “You must try our mojitos,” he told us. This was an excellent suggestion—the mojito was the best I’d ever tasted. Located at the Gran Hotel El Convento, the bar also offers delectable delights from its tapas-style menu. We enjoyed an assortment of the bar’s Spanish goat cheeses with our refreshing cocktails. The restaurant’s Calle de Cristo location, terrace-style seating, and Latin jazz music playing in the background are the perfect components for an evening out in San Juan.

The following morning, we rented a jeep and headed to El Yunque Rainforest. We stopped along the way for some lunch at a small café, where we enjoyed traditional Puerto Rican food: fried chicken, brown rice, and fried bananas. We arrived at El Yunque in the afternoon. Driving through the forest, we stopped at a kiosk for some local coconut fris, which is simply a coconut with a straw. We hiked for about half an hour to La Coca Falls; back in the car, we stopped at La Mina Falls, the grandest in the rainforest. The sounds of birds chirping and waterfalls crashing followed us throughout the rest of our journey.

My favorite part of our trip was kayaking through Laguna Grande, located on the northeastern coast of Puerto Rico. An amateur, I was excited and nervous at the same time. On my first attempt, I was going to kayak in the middle of the night—in a lagoon on an island in the Caribbean! With my friend in the back of the boat and myself in the front, we paddled through the bay into a waterway filled with mangroves, and finally to a dark, serene bioluminescent lagoon. We sat in the center of the lagoon, awestruck, as the moon’s light shined on us. For me, a woman who has always dreaded the outdoors, this was the ultimate way to overcome my fears.

Our journey continued to another island, Vieques, located six miles southeast of Puerto Rico. While planning our trip, Vieques topped our list of places to visit. For more than twenty years, the U.S. military used the island as a testing facility. In 1999, the they returned much of the island to the locals.

To get to Vieques, we had to catch the ferry from the city of Farajado, which is approximately one hour from Old San Juan. Leaving our hotel before the sunrise, we arrived in Farajado at around seven am. Our concierge had recommended that we arrive at the dock a few hours early, in order to catch the nine thirty ferry. The ferry departs only twice a day from Farajado, with a final departure at three pm. Tickets are two dollars per person.

After purchasing our tickets, we strolled across the street to Restaurante Culebra y Vieques, a breakfast joint popular among locals, for a bite to eat. There, we enjoyed some good, old-fashioned toast and eggs. Dishes are reasonable, between two and six dollars.

As we waited to board the ferry, we met a young girl traveling back to Vieques. She was originally from the Dominican Republic, where her father had been a pastor. “You will love Vieques,” she said. “When you arrive, simply catch a taxi to Esperanza.” After receiving tips on places to see, we boarded the ferry.

The journey was an experience. The boat was filled with locals returning home to the island. Children gathered on the staircases singing songs, while couples cuddled, taking in the ocean view.

Upon disembarking, we were greeted by drivers looking for fares. Between the masses of people and stray dogs, we managed to catch a cab and head to Esperanza, the island’s only city. Surprisingly, Esperanza is only a strip of buildings, guesthouses, shops, and restaurants. Just twenty years ago, the town was a major sugar port and home to 1,500 people. Today, the waters are filled with small fishing boats while the fishermen hang out in front of the local pubs. While many people live on the island, a majority work in Puerto Rico.

Craving something to quench our thirst, we made our way to the Ampola Inn & Tavern for some Cokes. The scene at the tavern is low-key, a mixture of locals and visitors. You may catch a tourist quietly sitting at the bar and reading the latest John Grisham novel, or a group of locals just hanging out. The inn is not hard to miss, as it’s bright blue and has a terrace-style restaurant and bar. Once we felt refreshed, we strolled a few buildings away to The Blue Carib Dive Shop to rent some snorkeling gear. Prices there range from ten to ninety dollars, depending on what you need.

Vieques has some of the most beautiful beaches. Due to time constraints, we remained close to Esperanza, but it’s recommended that visitors check out the island’s other beaches, which include Green Beach, Red Beach, and the infamous Blue Beach. While my friends snorkeled, I ventured around the island, taking photographs. One of the most interesting things that caught my eye during my explorations was how sparse and underdeveloped the island has remained.

Vieques and its people define island life. With coconut trees in every corner and white sand beaches, the island feels far away from the rest of the world. We only spent one day on Vieques, but it gave us a sense of renewal. The combination of the salt air, the sea, the winds from the Caribbean, and the feeling of isolation helped us to rejuvenate and prepared us to return to real life.

We spent five days and four nights in Puerto Rico, yet it felt like we didn’t have enough time there. Puerto Rico is an extremely small island, yet there is so much to see and do. I am looking forward to returning soon. 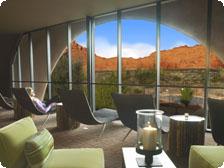 Wellness: Southern Utah, USA:  In the Desert with the Stones