Luce at her stand

Luce with her bags

I guess you can say that I was almost born with a concern with the environment. Whether it was a reaction against the excesses of the eighties that I witnessed as a child, or the empowering feeling one gets while feeling one is “doing good,” I certainly have green blood flowing in my veins. My Mum remembers to the day the way I used to tell her to close the tapwater while she was brushing her teeth (I was 4).

The real and tangible commitment, though, came about 3 years ago. Professionally, I’d been a graphic designer for almost 8 years, often working with corporations that were far from ethical. I felt like my personal and my professional life were split asunder and definitely not aligned. At that point, being 31 and feeling like I should really take a stand and walk the walk, I started making major changes in my life.

The first thing I did was to quit the cushy job I had in an ad agency. With the clients I had, there was no way I could ever even dream of being ethically aligned. So I went back home, designed my working space, and started trying to find clients.

At first of course, I took any client I could get, which were not always completely green, but they were better than the ones I had been creating for at my previous job. And in my spare time, I voraciously read everything there was to read about sustainable development and ecodesign. At length, I identified two huge sources of pollution: fabric and plastic shopping bags found in landfills. This information I then stored in one of the boxes in my brain for later use.

18 months later, I had garnered a few greener clients, and I was in regular contact with like-minded business and communications people. I was also a member of various organisations, ranging from a green business networking group to my municipal green political party, to the Montreal chapter of O2. We all admired diverse models for doing things but still lacked the occasion to put our new-found knowledge (and enthusiasm) to work.

In the winter of 2005, I randomly decided to take a vacation in Thailand, and there I had a revelation. In a small town called Pai, I had coffee with friends in a small café called All about Coffee, where they had, amongst other lovely ethical gifts, some bags that were made from recycled cotton clothes. And suddenly, the plastic bags and fabric figures popped right back on the front burner.

I had already been annoyed for months with the ubiquitous, made-in-China beige canvas shopping bags that the big grocery chains were selling like hot cakes. Being style conscious, I always refused to buy them, instead carrying my much better looking totes around with me. The colorful simplicity and the low cost of the All about Coffee bags inspired me to try and design a recycled ecochic shopping bag that would be a stylish and durable alternative to the beige shopping bags.

I endeavoured this knowing full well that I was not an accessories designer nor had I any experience whatsoever in marketing a product, let alone trying to produce one. And I can’t sew to save my life.

Upon my return to the bitter cold Montreal winter, I met with a crafty friend, and together (after visiting several thrift stores) we came up with the idea of using vintage bedsheets as our main material. The idea being that it’s always possible to re-wear clothes, but bedsheets and other used fabric often end up in landfills instead of being reused.

We then researched all kinds of models that would not waste fabric. In the beginning, we also wanted to make them completely foldable in a tiny pocket, but we soon found that production costs would skyrocket, and we wanted to keep it simple and very affordable.

At this point, all aspects of the concept were taking shape: I knew I wanted to give a certain amount of the profits to my favorite local NGO, and also that I wanted people to directly associate the bags with nature. While doing some research on endangered species in Quebec (my native province), I became aware that there were only 500 piping plovers left and that they were going fast.

In case you have never seen them, piping plovers are the cutest, most alert little beach birds you can ever dream of observing. They have tiny little legs, a funny egg shaped body and oversized pointy beak, and they run to and from the waves by the ocean, endlessly. To me, they epitomize summer holidays and my eyes welled up when I read that they are endangered and on the verge of extinction.

I also learned that their coastal habitat has been fragilised mostly by climate change, and climate change is induced by, in large part, human pollution and landfills overflowing with, namely, fabric and plastic bags. The loop was closed and the concept locked in. That night, we drank champagne.

At the end of April, we had final prototypes made and silkscreen printed. In May, I had about 75 bags ready to go. Perchance, I was accepted in the 2006 DesignBoom Design Mart at the New York ICFF. The bags were a huge hit, and that’s what started the ball rolling.

I then entered the bags into the first Closing the Loop sustainable design competition, and they won an honorable mention. At the beginning of summer I got myself an online Etsy shop and got good feedback. By that time, I was selling bags in 7 boutiques in Montreal.

In July, I met K, a Montreal ecommunicator who was gathering ethical designers to form a delegation of recup’ fashion for the Paris Ethical Fashion Show in October. I jumped right in of course, wrote my grant application in 2 hours, sent it off and was accepted. And during all this, I was contacting ethical shops all over the world to try and go international before the end of the year.

Eight months after starting the project, I can safely say that it’s the most exhilarating ride of my life! I’m getting press, I’m going to Paris, and I now have the privilege of selling the bags through The Natural Store. I feel truly blessed, and happy that I took the bull by the horns and didn’t let it go (yet…).

I hope that if you decide to purchase a POSCH bag, that it will bring you luck, and that it will help eliminate the use and discarding of hundreds of plastic bags worldwide. And of course, you’ll look great while doing your shopping.

To learn more about Luce Beaulieu and her amazing POSCH bags, visit The Natural Store and Green Grass Design. You can read Luce’s blog at http://blog.articlestudio.ca. 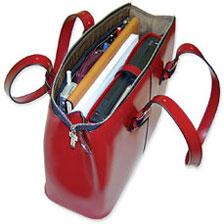 Style: Italy: Winter Gets The Boot—It’s Spring In Florence