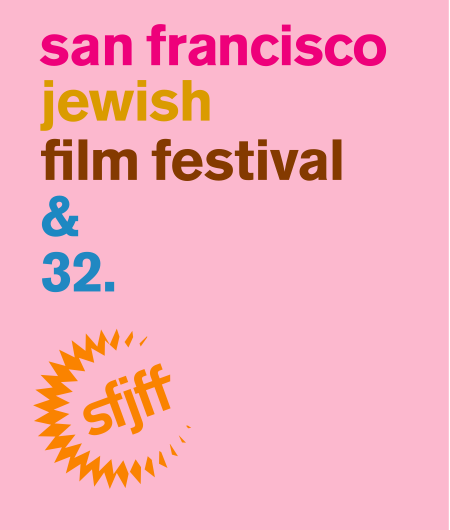 REBELS, RABBIS, REUBENS and FILM:
Catch the alliteration there? It’s this years SFJFF theme. Word trios toying with inclusiveness, diversity, stereotypes. Welcome to year 32 of the largest and longest running Jewish Film Festival in the country.

I’ve been told that the reason the 32nd place is blank on the program cover is for you to make up your own set of words for fun and prizes.

NU?:
Seven venues, including the San Francisco gem, Castro Theatre, Berkeley’s Rhoda, San Rafael’s Rafael, and Palo Alto’s Cine Arts. There will be a screening of Jewish short films on the wall at Oakland Art Murmur and The Piedmont in Oakland.

This year’s Freedom of Expression Award will be presented live to Elliott Gould for his contribution to the unfettered spirit of artistic imagination. As a member of the Jew Wave (think Woody Allen), Gould is well know for many of his 1960s anti-hero characters (“Mash”, “Bob,Ted,and Alice”) as well as early Bergman “The Touch”, breaking the stereotype of the Jewish male actor.

OPENING NITE: (DOC)
“HAVA NAGELA”
Here’s a celebratory and often comic music film covering 100 years of Jewish experience while tracing the origins of the song Hava Nagela from the Ukraine to Israel. Most US folks know the song as the suburban bar mitzvah anthem. We are treated to hilarious renditions by Connie Francis and Glen Cambell. NOW you want to see this film, don’t you?

CLOSING NITE FILM: (DOC)
The festival is book-ended for the first time by documentaries.
“AKA DOC POMIS” is directed by the team that made “Jews in Baseball”.
Jerome Felder, otherwise known as Doc Pomis, was a blues singer and composer who wrote hits for such greats as Willy DeVille, B.B.King, Irma Thomas, Marianne Faithful, Charlie Rich, Ruth Brown and Dr. John. Lou Reed narrates his voice.
There will be a rollicking post-film concert featuring cutting edge renditions of doc’s songs by local musicians including Sunny and the Sunset.

CENTERPIECE FILM:
“THE OTHER SUN” is a narrative about two kids; one Israeli, one Palestinian, who were discovered at age 18 to have been switched at birth. The Other Sun personalizes the conflict between the two countries, in an unsentimental, yet
nuanced emotional film.

SFJFF HIGHLIGHTS:
This year there are several films about music. “Under African Skies” features Paul Simon, the 25th anniversary of his hit “Graceland” and South Africa.

“BEN LEE, CATCH MY DISEASE”
Clair Danes is in this film, need I say more. Anyhow, Ben Lee used to date her. He was a child star in the music scene, then rock star, now taking another path. Ben is coming to the screening with his wife IONE SKY (star of “Say Anything”).

TWEEN SHOUT OUT:
JUDY BLOOM and her son (the director) will be at the Castro Theatre in person for an afternoon screening presenting the first Judy Bloom book adapted to film (Tiger Eyes). Willa Holland of “Gossip Girl”, “OC” fame portrays a young teen grappling with the sudden loss of her father.

TV ON THE BIG SCREEN: “ARAB LABOR” SEASON 3
Oh what a treat to see the entire series in one sitting. Some words come to mind such as sarcastic, cutting, biting, and utterly hilarious. It’s the most fun way I know of to gain an education on the cultural divide between Israelis and Palestinians. You can sneak a peek on YouTube or LinkTV on the web. We follow the exploits of Amjad who is quite aware of his inferior status as an Arab amongst Jews. Allow me one spoiler, that there’s a mind bending take off on Big Brother with the premise that one of the house-mates is an Arab posing as a Jew.

COMEDY:
“JUST 45 MINUTES FROM BROADWAY”
Independent filmmaker Henry Jaglam (“New Years Day”,”Always Eating”) will be in person with Judd Nelson and Tona Frederick. This stylized, west coast premiere is a celebration of actors and the family of actors.

OSCAR NOMINATED:
“INVISIBLE” director Michal Aviad will be present at the screening. Hey, she went to San Francisco State! Her film is based on real circumstances where two woman meet again twenty years after testifying against a serial rapist.

FUNNY QUIRKY
“OFF WHITE LIES” brings us an American teen who goes to Israel to be with his father.
Posing as refugees of the 2006 war, they try to get housing while working on their relationship during their journey through Israel.

“SHAKIRA”:
Kamal, a Bedouin who served in the Israel army, struggles to help his family during their eviction while going to work every day in his security job. A+ cinematography.

BEST SCREENPLAY AT SUNDANCE:
“RESTORATION” introduces us to a man at wits end, dealing with the death of his business partner, keeping his furniture restoration business alive, and his son who wants to close it. The plan is to restore a Steinway piano he finds. Restore is the operative metaphor, as in business and most importantly, life. You may recognize the actor from his role as the Egyptian band leader in “The Bands Visit”.

HOLOCAUST WW2 FILMS:
Ever the challenge, how to find a new approach or a new story to make us still feel for what happened in the Holocaust. I’m always amazed to discover yet another true story while attending the SFJFF.

“THE FLAT” (DOC)
The filmmaker Arnon’s granny dies and while cleaning out her flat he finds letters to Leopold von Mildenstein. Leopold was a Nazi,(precurser to Eichman), who traveled with his wife to Palestine in the 20s to see if they could send the Jews somewhere. The grandparents accompanied them and even stayed friends after the war.
Arnon can’t believe this information and goes on a quest to find relatives, coming up with a daughter to interview. Riveting.

“6 MILLION AND ONE”
David Fisher finds his father’s diary and with his siblings follows it to Austria where his dad is in a camp. Of course there is family psycho-drama as survivors deal with the aftermath. There are interviews with American servicemen who liberated camps. These guys carried a large burden and are considered survivors as well as the prisoners.

“ROMAN POLANSKI, A FILM MEMOIR”
Fresh from Cannes in it’s North American premiere, the life story of Roman Polanski.
You couldn’t make up a life story like this.
Recently Polanski was deterred in Switzerland pending extradition to US.
His friend Bromberg comes to interview him. With incredible candor, we follow him
from the Krakow ghetto, the holocaust, film school, Hollywood, Sharon Tate, Manson,
statutory rape charges and fleeing the US. The director uses all the Polanski’s clips to illustrate times in his life and point out how autobiographical his films are.

FRENCH FILMS: “THE DAY I SAW YOUR HEART”
Actress Melany was in “Beginners” and “Inglorious Bastards” as a young Jewish woman.
In this Father/Daughter story, dad befriends all her ex-girlfriends.

“BROKEN”
A young Jewish teacher in an African Amer/Arab neighborhood in the outskirts of Paris.

“IN CASE I NEVER WIN THE GOLDEN PALM”
What a great premise to show the director’s support group of directors who haven’t made films in over ten years, starring his family who will be in attendance after the film.

“THE LAW IN THESE PARTS” (DOC)
Winner of the world jury prize at Sundance, this documentary looks at the creation of a legal system in the occupied territory. Interviewing architects of the original law and exploring how that law was interpreted during the expanded occupation, we are shown never before seen footage of the occupation.

FROM TWEEN TO SHINING TEEN: “BOTTLE IN THE GAZA SEA”
Co-production France/ Israel
“Bottle” features a teen’s perspective of life in Gaza/ Israel. A young French woman and her family moves to Israel, witnesses a classmate die in terrorist action, starts to question what this is all about, writes letter to unknown person, puts letter in bottle, hope it will float to Gaza, young Palestinian teen finds letter, sneaks into computer cafe, starts email correspondence, a relationship develops, and no things don’t come together perfectly. Whew, this certainly isn’t a Hollywood production, but it rewards us with it’s sweet meditation on young people’s dreams.

“GLICKMAN”(DOC)
MARTY GLICKMAN was a 1936 Olympic athlete who didn’t participate because of antisemitism.
He became an All American football player at Syracuse, then a famous first Jewish sportscaster with the NY Giants and the JETS. He counted “Swish” (basketball term). There are interviews with Bob Costas, Larry King, and even Elliot Gould.

“KINGS POINT”
Seniors in a retirement center in Florida looking for romance.

FREE MATINEE: “GODS FIDLER”
Jascha Heifetz is profiled in this senior friendly film sponsored by the Bernard Osher Foundation. Invite the seniors in your life, they’ll love it.

ATTENTION ALL MILLENIALS:
The “Millenials Pass” is such a deal for young adults age 25 and younger.
$25 for 60 films.

FIRST SFJFF IPHONE APP:
Yep, gotta have an App, so get on over to the iTunes store.

THE 32nd ANNUAL SAN FRANCISCO JEWISH FILM FESTIVAL
JUNE 19 – AUG 8, 2012
For more information get the APP, or go to
www.sfjff.org
share and enjoy

Treat Yourself to a Madcap Evening at Teatro Zinzanni :: Seattle (and San Francisco)