Pink Martini is back in town! For those of you happily soaked in the 60’s sound groove this collaborative 12 piece band goes down oh so smoothly while taking you around the world.

“At one moment, you feel like you’re in the middle of a samba parade in Rio de Janeiro, and in the next moment, you’re in a French music hall of the 1930s or a palazzo in Napoli. It’s a bit like an urban musical travelogue. We’re very much an American band, but we spend a lot of time abroad … and therefore have the incredible diplomatic opportunity to represent – through our repertoire and our concerts – a broader, more inclusive America…”

But here is the twist! Vocalist Lucy Woodward will replace China Forbes in Pink Martini’s Northern California performances with the San Francisco Symphony at Davies Symphony Hall June 30 and July 1 and at Flint Center in Cupertino July 2. Forbes has withdrawn from the concerts on the advice of her physician, and must take an extended leave of absence from the band to undergo surgery on her vocal cords.

Born in London and raised in New York City, Lucy Woodward’s 2003 debut album led to an international tour and significant press exposure, including a spot on “The Tonight Show.” An award-winning songwriter, Woodward has written and recorded songs for several film soundtracks, including most recently the Golden Globe-winning The Blind Side. Lucy’s second album, Lucy Woodward Is…Hot & Bothered garnered high praise from critics. USA Today called it “a steamy, string-kissed slice of retro British pop by a versatile singer/songwriter.” “Lucy’s a ball, equally appreciable for fans of melodic sing-along baubles and highbrow aficionados of finely honed musical composition.

NPR White House correspondent Ari Shapiro, who sings and records with Pink Martini, will also perform with the band at each of the three Bay Area concerts.

Ticket exchanges, donations, or requests for refunds or gift certificates may be made through the San Francisco Symphony Patron Services Office by calling 415-864-6000 Monday through Friday, 10 a.m. to 6 p.m., and Saturday from noon to 6 p.m. 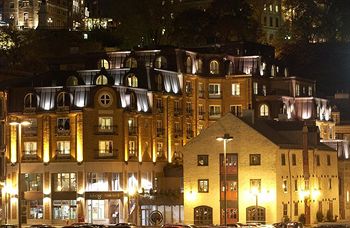 Ireland:Rock and Rock at Slane Castle