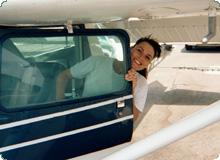 The morning of my solo check-flight arrived with an unpleasant gusting
18-knot wind. I stood on the tarmac and surveyed the gusts, 2 knots faster
would force me to cancel my check flight – the Cessna I flew could not
handle 20-knot winds hitting the side of the plane, that kind of wind would
flip the plane right after take off. Canceling was not an option. I just
moved out of my apartment in Orange County that morning and my car was
packed with all my belonging for my long drive back to northern California.
I had to successfully solo that day because I had no place to stay if the
wind picked up and my check flight was canceled.

I committed to learn how to fly and I needed to finish my flight training at
John Wayne Airport. The Southern California airspace was my playground for
the past month and a half and I was only trained to fly above Orange County.
Once I successfully mastered this airspace, I could continue flying
somewhere else. But I had to fly solo first. At 10:00 a.m., I maneuvered
myself into the frail-looking Cessna, carrying my flight bag and a whirlwind
of reflections. “If I make a mistake, this could be the last time my two
feet touch the earth.” I shook off the thoughts, put on my headphones and
started the plane. Minutes later, I was cleared to the active runway. While
taxiing, I thought about how I was able to accomplish this great intellectual
task. In six short weeks, I gained the discipline to successfully learn the
intricacies of aeronautics and Federal Aviation regulations and now I was
about to put this knowledge to test.

I took a deep breath and looked down the runway. I scanned the heading
indicator and checked my altimeter, I was cleared for take off. The yoke was
steady in my left hand and with my right I pushed the throttle forward. I
heard the single engine swallow jet fuel and air. The Cessna gained airspeed
and I pulled back on the yoke, leaving the safety of the ground. The only
souls I could talk with were the air traffic controller and God.

After navigating the skies above the blue Pacific Ocean and clusters of pale
salmon-colored houses, I entered the traffic pattern for John Wayne Airport.
I listened to the control tower while watching the skies and my instruments.
He landed three commercial airplanes before instructing me to enter the
final flight pattern. I was warned that a 757 was also entering the pattern
and to be aware of its wake turbulence. I saw the ghost-colored Delta 757
penetrating the sky like a shiny torpedo. The wake turbulence from this
intimidating plane could propel my small Cessna into cartwheels, which would
only be made motionless by the earth’s surface; the realizations of this
aerodynamic fact shifted my ideology of life and learning. I realized that
life is a short journey, but it can be filled with wonderful moments – and
that’s what I planned to do – fill it up! Minutes after this epiphany, my
mission was accomplished. “Seven One Four Zulu Lima congratulations on a
prefect landing.” It was in those few minutes, when the plane’s three wheels
screeched on the tarmac and I taxied off the active runway, that I was
cognizant of how much I accomplished. This success furnished me with the
honor of flying the vast, open skies, alone. Flying Solo – the ultimate form
of freedom.

Learning to fly had less to do with a dream of piloting planes than with my
unabashed proclivity to become a more interesting and genuine person. And as
Ralph Waldo Emerson said, “Character is higher than intellect. A great soul
will be strong to live as well as think.” I have done a brilliant job
learning and now I’m going to live.