Four men blast propane gas into the mouth of the hot air balloon. Belly expanding, the balloon gulps in the flame and waits for the next burst. Its rainbow of colors pop against the neutral blue sky.

It is seven a.m., and neither the sky nor the future passengers watching the balloon inflate have fully committed to awakening. It is crisp, but clear, with minimal wind and no high fog – the conditions so perfect that the two pilots beam and chatter excitedly. Ballooning is safest in the morning, when the air is cool and there are fewer thermals, or vertical air currents caused by ground heating, that can hamper a balloon’s ascent.

We are in the parking lot of a restaurant, not the place one would expect to launch an enormous hot air balloon. A quick glance around the crowd standing in a semi-circle around the spectacle reveals the thrill seekers and ringleaders, and the poor souls talked into the activity. The ringleaders stare expectantly. Their victims just stare, faces ashen, teeth clenched when asked to pose for pictures in front of what they are sure will be their vehicle of death. My father falls into the latter group. He is afraid of heights.

The balloon continues to gobble the hot air, rising higher and higher until it hovers above the gondola. Jim, the balloon’s pilot, motions his passengers over. The basket has no door. One by one, we step onto the foothold in its side, swing our legs over, and hop in. At chest height, the basket feels oddly comforting.

From his separate compartment in the gondola, Jim mans the four propane fuel tanks above his head, firing flames into the balloon with gloved hands. The blasts are deafening, and halt all conversation. The tethering ropes are untied. The balloon lifts.

The first recorded flight with humans was in France in 1783, in a balloon designed by Josef and Etienne Montgolfier, brothers from a family of paper manufacturers. The balloons were essentially cloth bags lined with paper that floated above a smoky grille. Not surprisingly, these balloons tended to catch fire and be destroyed upon landing. Balloons have also been used in war: the French used them to follow the movement of the Austrian army during the French Revolutionary War, and both sides used them, to no great avail, during the American Civil War. The modern air balloon is quite young. The first was designed, built, and flown in 1960 by Ed Yost. Its plastic balloon was fueled by kerosene fuel. The envelope of today’s balloon is made of nylon fabric and its mouth, of fire resistant material originally developed for parachutes in the space program.

With Jim at the helm, the balloon rises, higher and higher. Thirty years before, Jim and a few friends took a ride in a hot air balloon. They loved it so much that they decided to pool their resources, buy their own balloons, and open up a company. The pilots are centered, at peace, their calm happiness infectious. My life has been extremely stressful of late; I am a jangle of nerves, a basket case. This ironic moniker occurs to me as we ascend.

We climb higher. The balloon’s altitude is affected by the temperature of the air inside the envelope. The hotter the air, the greater the ascent. Jim blasts flames into the envelope to lift. But it is a delayed response, one that takes some time to get to know. The balloon flies with the wind’s current, which differs in each layer of the atmosphere. Pilots must be constantly vigilant about the wind directions below and above the balloon.

We float away from the restaurant, and across vineyards that always remind me of cornrows in a young girl’s hair. My friend spots rabbits hopping along between two rows. Mist hangs low, clinging like lacy cobwebs to shrubbery and low trees. The sun is rising, albeit reluctantly, and we squint into its light. Between the blasts, all is still. Silent. Serene. The gondola floats as smoothly as if we were traveling over flat ground.

Another blast. We float over Highway 29, still empty at this hour. By now, the sky has become more assertive and committed to a cerulean blue that is unobstructed by clouds. Three other balloons share the sky near us, then two as one drifts away toward the mountain range. We climb as high as 2,300 feet.

After an hour has passed, Jim prepares for the descent. He tells us to face the outside of the gondola and bend our knees, just a bit, until they are resting against the basket, and firmly grasp the edge of the gondola. We can see the chase vehicle, a white van, waiting for us in the field. The landing is softer than that of most airplanes. The ground crew is there to assist with the landing, and Jim asks the men in the balloon to hop out and help them out. They do. My father is among them. Having faced his fears, he is beaming.

We are all beaming. Beaming basket cases. 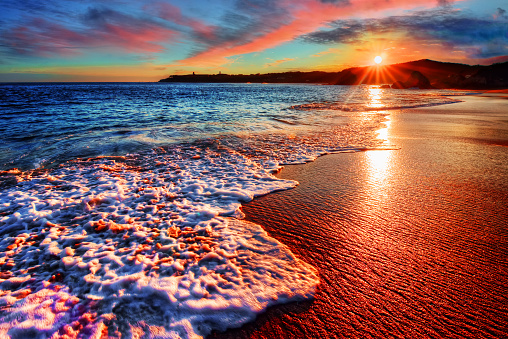