Inspiration: Africa in a Day

The African coast was within sight. Though a day trip to Morocco wasn’t what I had imagined for my first trip to Africa, it was a start. As I stared out at the cobalt-blue water and watched the colossal Rock of Gibraltar shrink behind us, a single dolphin leapt from the water and danced alongside the ferry. That had to be a good omen, I thought. I had no idea what to expect of Tangier. I’d heard horrible stories and hoped this day trip wouldn’t sour my desire to travel further into Africa.

After a four-hour ferry ride, I finally disembarked onto African soil. For as long as I’ve traveled, Africa has been my Mecca. I’ve always wanted to be one step ahead—one country, or, in this case, one Continent beyond what the average person was destined to see.

If Africa is the “Lost Continent,” Tangier is the found city. Utter chaos and hordes of people milled about as I stepped off the gangplank. If I closed my eyes, I could have been in Tijuana.

“I own shop; you need things—I take you. Come with me.”

My guidebook clearly stated that I should only accept rides from a certain type of licensed taxi, so I maneuvered my way through crowds of men intent on touching me and found the right cab. Tangier is a maze of streets and alleys crammed with walls of people. As we barreled through the crowds and tiny back streets, I had the feeling that if he wanted, my talkative driver could have been halfway to the Sahara and there’d be nothing I could do. However, he dropped me off at the base of a windy hill and pointed up. I deciphered through hand gestures and grunting that I had ended up in the center of this bustling city. I had tried to dress conservatively, but the Moroccan men still gawked at me.

The smells of the city changed along each street, some so strong my eyes burned. I stumbled upon a food market where freshly skinned chickens hanged from their feet, only a few random feathers sticking out, their heads cocked to one side. I made it to a stall with olives overflowing in large bins and toothless men refilling them. Munching on the juicy olives, I wandered back into the souk and found the perfect shop. I needed my own piece of Africa. The walls were an array of colors and trinkets. A round, shiny, deep orange tin caught my eye. It was smooth, adorned in brass, and smelled of mint tea. I converted the price in my head: two dollars. I decided it was too much, and tried to bargain.

“Will you take a dollar?” I asked. The shopkeeper pretends he speaks little English, though I swear I overheard him speaking fluently moments ago.

“Will you take one?” I probed.

“Two dollar, two dollar!” He yells and mumbles a diatribe, probably about cheap Americans. Sheepishly, I took out two dollars; he snatched them from me and wrapped my trinket. I felt guilty bartering over two lousy dollars, but everything is expensive when traveling. In the past, I would have left the tin out of principal and kicked myself the first time I took the subway back in New York for a buck fifty. Bypassing the bartering, I found a few more shops and loaded myself down with Moroccan slippers, mint tea, and even a beautiful tagine. I stopped and had dinner at a small café aptly named The Moroccan Café before heading back to the ferry port.

Eventually, I would travel further into Africa on stunning safaris and basking in the beauty of Victoria Falls. As the years passed though, it would be the small, orange tin that always found a place on my desk: holding loose coins, my rings, but mostly the memory of a naive girl who traveled alone to such a distant continent and made it back in a day.

Keep in mind when traveling to Tangier…

• Tangier is only nine miles across the Strait of Gibraltar from Algeciras, Spain, so it’s an easy day trip if you’re already traveling through the south of Spain.

• Be conservative in your dress. Shorts are not acceptable, and a light, long-sleeved sweater will keep you from being gawked at.

• It is customary to barter while shopping, though Tangier is a port city and used to tourists. Be fair and don’t leave something behind out of principal! 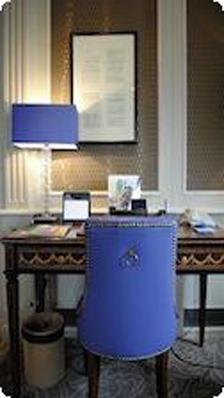