My girlfriend Krissie has a few friends staying with her from the East Coast, so she invited me over for a slumber party at her house. I got to her house around 5 pm and we opened a bottle of fabulous Zinfandel with our other great friend from Florida, Karla. The last time I saw Karla was in Miami, where I did a book signing a few months ago, so we had lots to catch up on. We laughed, sipped our wine while chilling in Krissie’s kitchen. The conversation was a mix of topics like Karla’s hot $700 stilettos that she was wearing out that night and Krissie’s latest shopping spree at Nordstrom, I talked about how happy I was because I was quoted in the San Jose Mercury News about travel wear and they wrote about my Gucci fanny pack, so now I can claim it as a business expense. Oh, the little joys in life. â˜º Karla had made reservations at a hip, new tapas bar in San Francisco, so we jetted after polishing off the bottle of wine.

Our dinner at Laiola was delicious — and so was the glasses of wine! We dined on deep fried corn fritters with aioli dip, roasted pork, bacon-wrapped dates, and salted chocolate with fried bread. Because I was not driving — which is a treat — I decided to really enjoy the wine that night. Plus, I know that I was going away for 7 days of cleansing, so I wanted to have a “last hooray!”

I was still really sick from Cancun, so I started the night sleeping in Krissie’s bed with her, but I was hacking like a smoker, so I spent most of the night on her couch and feeling miserable.

Krissie took me to the airport that morning and got pulled over by a policeman because she had expired registration. She had it in the car, but she was still in her pajamas and did not bring her purse with her (you got to love your girlfriends!).

Once I landed in San Diego, I was picked up at the airport by my dear friend Libby. We went out for my “Last Supper” before she dropped me off for a week of wheatgrass and raw food. We went to this killer taco place that served a kick-ass carne asada burrito. Covered in grease and smelling like grilled cow meat, we drive through the bowels of San Diego to the crappy town of Lemon Grove, where OHI is located. We drove by a WalMart, KFC, Taco Bell, check cashing places and a sundry of other sorted establishments. Libby started laughing and said, “Man, if you want me to pick you up and save you, I will!” I shuddered at the sight of the ‘hood, but promised her that I could make it through the week.

Libby left me and returned to the manicured lawns in San Diego proper.

When I first walked on the property, it was quite eerie. Everyone had these grins on their face and glided instead of walked. Libby had driven away by then, so I could not turn back.

At 4:00 pm, all the new guests got a tour of the grounds, which are large and include a whole townhouse complex. There was about 50 new guests this week and we spent the evening meeting each other. Many traveled across the globe for this experience including Berlin and Austria.
I found out that the program was actually 3 weeks, and many of the new guests were staying the whole three weeks. So, I was feeling pretty good about my one-week commitment. Short and sweet.

At last, dinner. OHI serves only raw, vegan food. That means everything is served at room temperature, it has not touched any stove or oven, and no animals were harmed in the making of the food (unlike my usual diet). Oh, and there is no cheese or eggs here either. (yikes!)

After dinner all the new guests attended a class about OHI and their philosophy. Basically, their program is not just about detoxing the body, it is also about detoxing the mind and spirit. Right then, I knew it was going to be a rough week. I had to detox on so many levels. 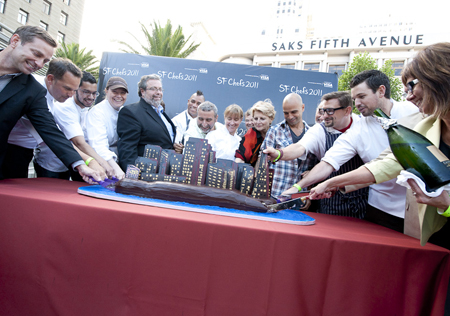 Hurrah for Brandini Toffee- something yummy for all!