Culture: Tanzania: This Bus Departs at Nine in the Morning

“This bus is going to fall,” I cried out in my Swahili 101. It was both a statement and a question. The Buddha-bodied, sarong-wrapped woman to my right laughed at my big worried eyes.

“No, young sista,” her electric white teeth glowed through me. Hamna tabu, no problem. Her corpulent arm, the size of my thigh, fell on my shoulders: a universal gesture of comfort. There are six different ways to say “no problem” in Swahili, depending on the degree of the problem. It is not desirable, in Tanzanian society, to be the harbinger of discouraging news.

You could travel by car from Iringa to the mountain-nest village of Pommerini in four hours. By bus, it may take up to ten hours to travel the same distance. “This bus departs at nine in the morning,” the authorities tell you, pointing to a crude, archaic map of your destination.

In reality, the bus always leaves well after midday, except the one time you cleverly arrive at noon, to avoid waiting in the blistering fumes of the crowded marketplace. They nod their heads at your disbelief.

“I told you many times, this bus departs at nine in the morning.”

When you purchase a bus ticket this does not guarantee you a seat on the bus. One voyage, I stood for four consecutive hours, with the physical support of other passengers’ bodies. And no, they would not let me ride on top of the bus, with all the cargo and the bus attendants, despite my begging.

“It would not look good to have muzungu on the roof,” the bus driver concluded, taking a sip of his Tuska beer.

Tanzanian buses are motorized community centers. Some passengers organize a chorus to drown out the clamorous juju music (comparable to Caribbean music stuck on fast-forward) selected by the driver and his attendants. The driver will play his single cassette repeatedly the entire ten-hour journey. I became an instant celebrity the day I introduced Bob Marley’s Legend on a bus trip.

In the back of the buses, men gamble with a deck of cards, drink bamboo juice (a lip-numbing spirit with a Whiskey Sour tang), and exchange entertaining personal narratives and dirty jokes. Women socialize, breast-feed cloth-attached infants (who never cry), sew, coif one another’s hair, and generate beaded jewelry. Children amuse themselves by watching me or agitating the omnipresent livestock. (Do goats and chickens purchase bus tickets, too?)

The African highways, dotted with lunar-crater-sized potholes and decomposing vehicles, do have rest areas. These oases in the naked bush greatly resemble American truck stops, offering a bar, a restaurant/disco, and a flophouse. Lacking are the souvenir shops, refueling stations, and toilets. The length of one’s visit is solely the discretion of the driver, who often does not feel obligated to notify his customers of departure. At the sound of the engine, individuals abruptly drop their meals, and then chase and leap onto a rambling bus. Those passengers securely on board enthusiastically generously applaud for successful landings.

During the trek, if you must relieve yourself, it is custom to yell, Choo!, vernacular for “john” or “toilet.” The bus does not actually stop, but if the driver favors you he will slow the bus down significantly and continue in a dull roll. You alleviate your burden alongside the route, often without bushes or ravines to conceal your private biological functions. This means you and often a few peers, are urinating (or worse) in full view of the bus and its occupants.

You adapt to this humbling situation, learning to work quickly to avoid a kilometer jog to capture the bus. I wish not to mislead you; the drivers are not sadistic. Rather, they fear—with reason—that the decrepit, second-hand buses will not survive frequent stops. In the African country, a defunct bus becomes a fossil, its occupants fully exposed to Nature’s impulses.

On this particular trip, in the dawn of the rainy season, we were ambushed by mud. As we scaled the side of the mountain, a mud pocket swallowed the two left tires of the bus. Tomatoes, kerosene jugs, greens, and other cargo began trickling off the roof. The bus attendants dismounted and laboriously pushed the bus while the driver prayed loudly that the bus free itself from the grasp of the earth.

I feared the bus was going to tip over on its left side. I was only partially correct. The aforementioned Buddha-bodied woman to my right remained optimistic until individuals alarmingly invoked Jesu Cristo and Allah. In that delayed, dream-like quality of traumatic experiences, a wave of heads turned to the right in unison. Trees, bushes, and wildlife surfed a colossal swell of mud.

The impact of the sliding earth on the unfortunate bus spit the tin vehicle on its left side and carried it well down the mountainside. I recall some bowel-shaking jolts and the thunderous reverberation of the volcanic mud rush during the actual “relocation” of the bus, but not much else. All crests eventually fall, and with the assistance of two obstinate trees, the bus halted and mud slithered over and under us.

An eternal, breathless silence followed the violent stop; not even the livestock whispered. A photograph of the interior bus landscape would exhibit human bowling pins immediately after a champion strike. With the bus exhausted on its left side, we were piled on one another like logs preparing for a fire. Shock slowly evaporated and sore limbs peeked from the mass. Those people nearest the right-side windows began to prudently crawl out of the mud-oozing bus.

I was one of the last travelers to be pulled through the muddy openings. Everyone cheered as the final passenger, a milky-haired African man dressed in a forced suit, surfaced the drowning bus. People congregated in small circles, inspecting one another’s wounds and bruises. To my knowledge no one was severely impaired, but of course, a Tanzanian would never confess discomfort.

My only memorable injury resulted from a bus-tossed chicken that found refuge up my skirt. Once the chicken realized it survived the turbulent encounter, it decided to peck its way through my bare inner-thighs. The frenzied fowl’s bloody incisions made walking extremely unpleasant for several days. I was comforted by the fact that, if the chicken escaped the bus alive, it would certainly be fried soon.

The tattered Africans, some with bare feet, collectively and wordlessly began to ascend the mountain. No one searched for possessions; they just calmly scaled the mud mounds towards the nearest village. There were no crying children, no declarations of legal pursuit, no cellular phones to notify the authorities, and absolutely no word of a refund. I quickly scrambled after my big-bosomed companion. “What do we do now?”

“Oh, hamna shiba!” she responded. She observed me cautiously, “What are you thinking, young sista?”

“We will walk for a long time.”

She laughed abundantly, put her arm around me and exclaimed, “Karibu [welcome] to Africa!”

After a long pause, I said to her, “You know, the next time the bus is going to fall, I am not going to sit by such a fat woman.”

She could not stop laughing.

Kelly N. Patterson is originally from Washington, D.C., but has lived and worked on four continents, over the past ten years, as an international development specialist, teacher, writer, and editor. Kelly is currently in southwest China working on a book entitled “Searching for Shangri-La” with Chinese-American photographer Al Zhou. She resides in Antigua, Guatemala. 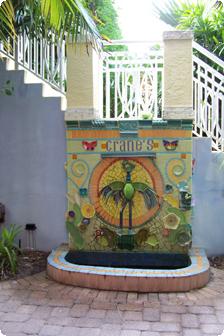