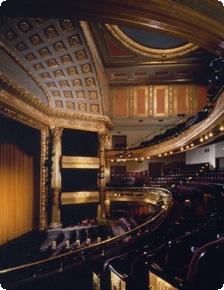 Quiet moment amidst the madness

Smith and Brown work it out

David Mamet’s over-the-top new satirical comedy November takes a merciless stab at American politics, the nature of our populace, and, well, the integrity of theater. The rave reviews you’ve no doubt already heard are justified: the laughter is abundant and hearty and endless. The jokes are clever and, at times, laced with insight. Six words: shock value (3x). I had fun. I enjoyed myself. I took something from the play. But Mamet, although he presents a less than bleak view of Americans and generally all of mankind, does not expect (or seemingly ask of) us to go home and change the way we live. This play was written for dollars and will surely make them. Go see it. It’s like the “by-far” best thing on TV. But I’m left to wonder if the points will resonate. That’s up to you.

The play, being staged at American Conservatory Theater, has a ridiculous and entertaining plot – to say which prevails, the absurdity or the humor, would be difficult. Reader beware: spoiler alert! We meet President H.P. Smith only days from election for his second term. Popularity is “lower than Ghandi’s cholesterol” and he does not have enough money to leave the White House with a presidential library. This is a fact his wife will not forgive him – if she finds out – and Smith is more terrified of her than Iran; he gets her off the phone by claiming “Iran has launched a nuclear strike!” and when Iran calls, denying this rumor, Smith shrugs it off. “Tell him it was my mistake. I’ll call him back.”

The president’s aide, Archer Brown, reminds Smith that he can raise “campaign” funds up until the election. Enter Representative of the National Association of Turkey and Turkey By-Products Manufacturers (or, for our purposes, Turkey Guy), who needs his turkeys to smell the president’s hand before they are pardoned at the annual Thanksgiving ceremony. Smith demands an increase in the association’s honorarium and offends Turkey Guy, who leaves. When the pork industry does not buy the president’s plea he attempts to get Chief Dwight Grackle of the Micmac Indian nation to proclaim tuna was the original Thanksgiving spread (not realizing, of course, that tuna is a Pacific fish); he so offends Grackle (a “dime store Indian”) that the latter threatens to assassinate him.

Switching to another tactic, Smith tells his lesbian speechwriter, just returned ill from China where she and her partner went to adopt a baby, to argue why Thanksgiving is wrong; her speech is so convincing Smith decides if Turkey Guy won’t give him $200 million he will pardon every turkey in the country. “Point to anything which is not wrong,” he says, to justify this. The American tradition of eating turkey on Thanksgiving is amongst “things we have done in our ignorance,” like “slavery … and disco!”

Turkey Guy enters at the beginning of Act II and offers $300,000 for the president’s cooperation. Smith tells him of the new price and reads some of Bernstein’s speech. Turkey Guy leaves in disbelief and Smith champions Bernstein’s work ethic. As a “tinkerer,” he says, she is part of what originally made our country so great.

“Who made this country great – who? Tinkerers!”

“People with ambition. At the water coolers.”

Although the president hesitates to condone lesbians and their “loathsome and abominable practices,” he agrees: “it’s true though, isn’t it?”

“It’s what people need to hear.”

When he continues and says “the low winter light” that will lead the nation to change will also lead to $200 million he can put in his pocket, Bernstein stops typing, refusing to participate in “an exercise of extortion.”

He argues that her visit to China to pay for a baby is no different than his act of paying her for the speech. Even though she stands as the president’s foil throughout the play, he declares that the $25,000 she paid (he checked her credit card account) was not just “administrative costs associated with the adoption.”

“I insist on that point.”

“To who?” he demands. “Get it? Ain’t nobody in this room but us. All your freakin’ BS about social justice – that’s swell. But you forgot: this is a democracy. Which means, the people make the laws. And if you want to make the laws, you go to the people who make the laws, and – what do you do? You bribe them! You give them something they like in order to get something you like. Just like you did in third grade. You say ‘give me your candy bar and I’ll give you my orange; you do not say ‘give me your candy bar because it exploits the cocoa workers in Brazil.’ … I like you Bernstein, you know why? You’re great at what you do. Do I respect you? Hell no. Your head is full of trash. But – you can swing the bull. I’ll pay you for that. I will pay you for that speech. What do you want?”

She wants him to marry her and her partner. When Smith refuses, she urges him to do something pure with his remaining time in office, and at that very moment Turkey Guy calls to say he will pay the $200 million. Brown is jubilant that Smith can go home rich and with a library, but Smith, suddenly with $200 million and impassioned by Bernstein’s speech, decides to try to regain the office. The scene ends here and the plot changes (a little too fast, I thought). The curtain is dropped for intermission.

Are we supposed to recognize the absurdity in this argument? Does Mamet condone this philosophy? With one or maybe two exceptions, every time the tone of the play gets serious we have this kind of “water cooler” credo reverberating through the silence. This is how American politics works, people. We are literally governed according to this idea. We may laugh at ourselves and we may do so heartily, but when we walk out of the theater we need to remember that this is not OK. It might feel great to have looked ourselves in the face for a few collections of minutes and then left it behind – as a comedy and as charade. It’s good to laugh at this. At ourselves. But it’s not OK to leave satisfied and feel vindicated by what we’ve seen.

In a recent interview, Mamet says he does not “think that people are good at heart …I think that people, in circumstances of stress, can behave like swine.” Mamet may be right – we might not be inherently good; but we can still strive for goodness. We can still refuse to take bribes. We don’t have to act like swine just because our leaders justify such behavior – whether they be presidents or past presidents or prolific playwrights.

Act III begins with Bernstein arriving in a wedding dress clutching a speech that is so good Smith is instantly convinced it’s his legacy, and commands Brown to find a way to marry her to her partner. She explains she’ll give him the rest of the speech after he marries them on national TV (directly before the ceremony). Her partner is waiting in the antechamber, also wearing a wedding dress. Turkey Guy returns and overhears Smith and Brown brainstorming about the marriage and declares he cannot give them the money if they are going to marry “lezbians.” Brown suggests Smith sell Bernstein out and Bernstein returns in time to hear this. After an impassioned argument, she gives Smith the speech anyway.

Brown informs us that the turkeys have died in the waiting room. According to the doctor they died of bird flu, and after Turkey Guy blames Bernstein (whom he assumes contracted the disease in China), Smith accuses her of treason for starting a national flu pandemic. But at this moment Chief Grackle arrives to assassinate the president. He shoots a poison dart at Smith but Bernstein jumps in front of him and saves his life. But she is saved by the Chinese amulet she was given in the hospital after adopting the child. No longer caring whether or not he wins the election, Smith announces he will marry Bernstein and her partner on national TV. Grackle then asks for a pardon, and Nantucket, while he’s at it – and the two will start a casino together. The last line is Smith exclaiming: “Jesus I love this country!”

I do not blush to give away this plot because it is so outlandish it would be impossible to explain otherwise, and Mamet moves from one scene to the next with a series of jokes and witty exclamations so funny that the plot hardly betrays the play’s content. In the unfolding of these back-handed dealings the president and his aide engage in dialogue almost shockingly reminiscent of that spoken by The Dude and Walter in The Big Lebowski; in fact, Mamet seems to address the idea when Smith, incredulous that the woman he meant to betray risked her life for him, asks:

Bernstein tells Smith every president who has ever held the office was just another “guy in a suit.”

“You can marry me and my partner.”

And so, presumably, President Smith allows the marriage. The play ends when a flag the size of the stage comes down – an American flag, distorted and in every color of the rainbow. “Let the next guy figure it out,” he says.

So in the end Smith does something right. In one of the play’s few attempts to sincerely grasp an important issue, the president asks Brown, bewildered, why it’s against the law for any two people to marry. “It used to be illegal for two different races to marry. What’s the difference?”

True theater, I believe, should challenge who we are and compel us to leave with a stronger sense of self and an impassioned desire to obtain it. Remember: the play ends with the flag, not the exclamation!

November is playing at ACT until November 22.

The rest have passed, but ACT provides for each play nights like Out with ACT and Bike to the Theater Night, which, in addition to special features, have special prices!

Go to ACT’s site for information on their upcoming shows!

Read my article on their last play, Brief Encounter.

Next up: A Christmas Carol and the world premiere of Phedre. 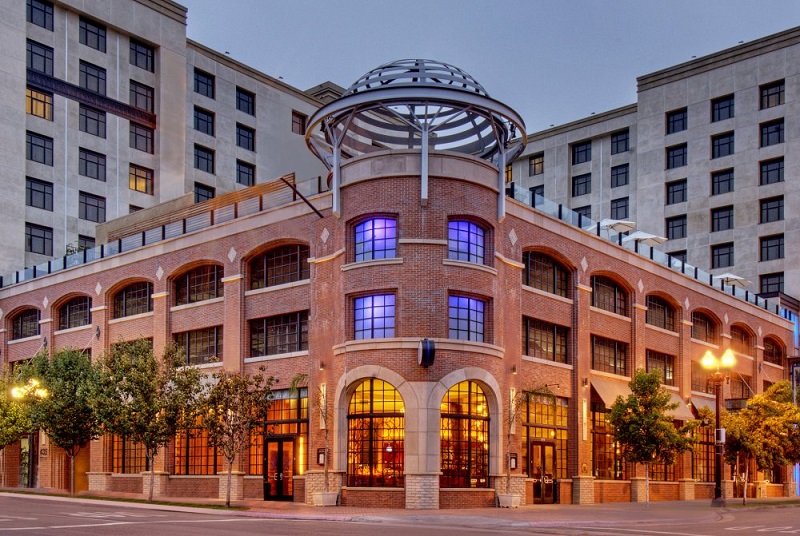 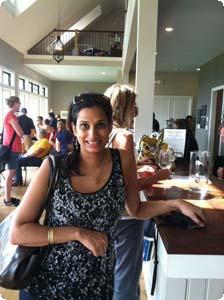 Culture: A Winery Excursion Minutes Away from Washington D.C.