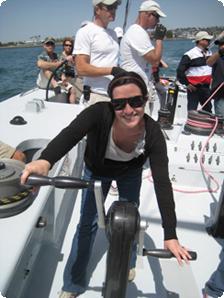 The city of San Diego

The docks on a beautiful day

Sunset from the 10th floor

Apparently, you can have too much Sauvignon Blanc. Although I am admittedly quite fond of the herbaceous varietal, a taste I obtained while residing in New Zealand, I temporarily called a moratorium on all glasses of glistening white vino until I was certain they would no longer induce spinning rooms. The decision stemmed from a rather fulfilling evening out at San Diego’s Steak and Seafood joint Lou and Mickey’s. Four glasses of Sauvignon Blanc wasn’t even the half of it, but it was the reason that I woke up at 4am, flung into the soft comforts of a king bed at the Marriott Residence Inn, with a throbbing headache.

The first thought that crashed into my hazy mind was that I had a sailing trip booked the next morning, and as everyone knows shaky sea legs and two bottles of wine are not necessarily an ideal combination, unless of course you are planning to try out for Keith Richards’ role in Pirates of the Caribbean, or if you are in fact Keith Richards himself. So the concern for strong currents and impending nausea nagged at my mind for a brief period of time, until I once again drifted away to my dreams. But I’m getting ahead of myself…it all started with a beautiful bird painting in the lobby of the Marriott Residence Inn.

My husband Matt and I were sipping drinks in the ultra swanky lounge area of the hotel, located in San Diego’s historic Gaslamp Quarter. The area was furnished with cool mid-century modern pieces jazzed up with a bit of funky color like lime greens and aqua blues. Matt noted that although the mini cocktail tables weren’t exactly his taste, the large painting across from us was catching his eye. Mounted on an old brick wall, which apparently dates back to the late 1800s, was a green and white painting of a bird. If it sounds uninspiring, it’s not…trust me – I’m no bird gazer. But this piece was chic. Even Matt approved and his artistic palette is very discerning, I assure you. Cool candle holders and brightly colored centerpieces helped to create a much hipper theme than you would imagine for a Marriott Residence Inn.

In fact, this property is the new kid on the block. The lobby doors opened in November 2009 and ever since they have been swinging with an influx of visitors, some of whom are seeking short stays, while others turn the hotel into their temporary abode often for weeks or months at a time. One guest even went so far as to cook up a BBQ dinner for the staff one evening, clearly earning himself two candies on his pillow the next morning.

Strikingly reminiscent of a New York loft space, all of the rooms feature small kitchens that boast ruby red walls offset by coffee-colored cabinets. The king sized beds draped in soft white comforters are a calming contrast to the cooking area. Beach scenes from local San Diego photographers dot the walls. The resulting effect is truly a home-away-from-home feel; only it’s likely much more artistically designed than your own pad. My favorite part of the entire property was the wall mural located in the pool area, a painting of various dapper looking gentlemen, the same lot you may have seen strolling the streets of the Gaslamp in the early part of the 20th century. After discussing interior design and bantering a bit about what was chic and what was akin to shag carpeting, Matt and I casually strolled to our dinner destination.

With its elegant wood paneling and the fresh smell of seafood wafting through the air, Lou and Mickey’s reminded me of being on the San Francisco pier, without the enveloping layer of fog. After being seated, no time was wasted in ordering our first bottle of Sauvignon Blanc. Priorities are priorities after all. The menu was extensive and everything looked delicious. Oysters…check. Calamari, you betcha. Two tiered tower of clams, mussels, shrimp and crab…oh my! Seriously if it’s one thing that can never be overrated, it’s fresh seafood. Matt and I took no hesitation in stuffing our faces. The delicate silverware ballet was forgone for an absolute finger-licking free-for-all. And this was just for starters.

The second bottle of Sauvignon Blanc arrived as we deliberated over our main course options. It’s hard to really narrow things down when you’re choosing from plates like Fillet Mignon and South African Lobster Tail, Alaskan King Crab Legs and a Porterhouse Steak, but since seafood was quickly becoming my new addiction, I chose the Atlantic Salmon with Port Wine Reduction. Matt, who is always the more adventurous diner of the two of us, elected the Cowboy Steak, “the rarer the better.” And boy was it rare. Ladies, if you are seeking to impress on a first date do not hesitate, putting one of those delicious cuts of meat back will easily guarantee you a return phone call. It was a whirlwind of flavor, all swashed down with that marvelous, chilled Sauvignon Blanc. I can’t begin to explain how difficult it was for me to say no to the dessert menu, I have a weak spot for crème brulee, but it was around this time that my stomach shut down for business, Matt was becoming chattier by the minute and my cheeks felt unusually flushed; check please!

As the first morning light crept through the cracks in the curtains, I momentarily had a lapse in memory and wondered if Matt and I had actually attended an all-night kegger, I was in a post-inebriated daze. But alas, no…just four glasses of wine over a three hour period were the cause for my hangover, sometimes reality bites when you realize you’re not 21 anymore. Thankfully the folks at the Marriott don’t mess around when it comes to breakfast, which by the way is included in your room price. After seeing an equally bleary-eyed Matt off to his 9-5 job, clearly he’s not 21 anymore either, I made my way down to the mezzanine for bit of fuel. This isn’t your run of the mill continental breakfast. Eggs, muffins, bagels, cereal, yogurt, oatmeal, fruit, waffles and an assortment of coffees, teas and juices are the options, and I stocked up…which was fairly surprising since just 10 hours prior I thought I would succumb to overeating. The food did wonders and it was a good thing, as my day would require some serious use of my muscles. Good thing I’ve been lifting those five pounders.

80-degree weather greeted us down at the docks, and the breezes were mild and warm, San Diegans are spoiled. There, before us, was the Stars and Stripes, a multi-million dollar American Cup competition yacht. Now, I know absolutely nothing about sailing, I may as well have been in math class at this point. Tack and jibe, grinding the winches…sounds like some pretty painful dance moves if you ask me. But because I hate to sound ignorant, when Brent, one of the crew members asked me if I wanted to be a grinder, I didn’t inquire if that had anything to do with coffee. Turns out grinding the winches means that you are helping to raise the sails and assist with navigation tactics. I think the crew might have been a bit bemused that I volunteered; at just over 5’0 tall I’m not exactly brick smashing material. It was noted however that even six-year-olds could do this, so clearly I felt some pressure.

With Captain Lynn Hanna at the wheel, we set off onto the bay and my arms got their first workout when we helped hoist up the sail. The gentleman across from me probably did his share and half of mine, but he was quite sweet and even gave me a little wink. I’m sure he would have been impressed had he known that I ate a bit of Cowboy steak, the rarer the better. Afterward, I stepped up to help grind on the right side of the yacht under the guidance of crew member Mark, who remarkably made the process of tacking and jibbing (turning the sails) look a whole lot easier than it really was. He also shared his stash of pretzels, which was pretty cool. When the captain invited me up to steer, Mark reassured me that it was just like driving a car; without a road. I could barely see over the wheel, so I’m not sure if that concerned anyone, but Captain Lynn did a great job of making me feel like I was doing something impressive, although we all know that no one really trusts a 5’0 non sailing expert who lifts five pound weights with a multi-million dollar boat…but the illusion was nice. I mean, I didn’t go all Leonardo Dicaprio in Titanic, but I felt important.

When the rest of passengers and I weren’t helping out the crew, we enjoyed the ride, scouting for dolphins as we cruised along at ten knots. Having gone into the experience as a novice sailor, I came away feeling much more confident. I now know what grinding, tacking and jibbing entailed and I could congratulate myself on not embarrassingly tumbling overboard. Grace is not my middle name after all. It was a trip I’d highly recommend to any adventurous lady, looking for a bit of fresh sea air. Plus, the crew is comprised of a group of sturdy, friendly, good looking dudes, who might take you up on an offer of a Cowboy Steak and glass of Sauvignon Blanc, just remember you’re not 21 anymore.

Alexa Evans is a full time web-marketing editor, and as often as possible, freelance travel writer. She enjoys aimlessly strolling the streets of foreign cities, sipping wines from here and there, eating freshly prepared Italian dishes and going on long walks to nowhere in particular. 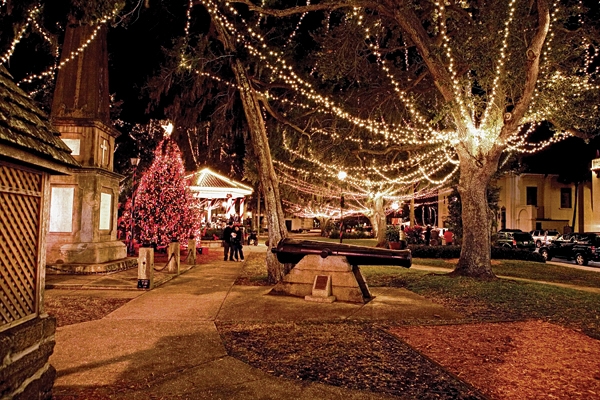 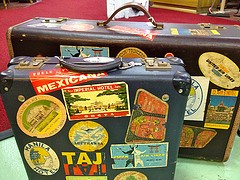