(staka’ shun) /n. / a neologism used by modern day Mrs. Mortimers and real-life Homer Simpsons who choose not to travel and prefer to unravel the mysteries of the world from the comfort of their living-room couches.

With the exception of the last two years (and I’m well into my thirties) I have made it a point to spend as many of my holidays as possible far, far away.

I remember years ago one gorgeously glaring morning on the terrace of a pension in the Sultanahmet neighborhood of Istanbul listening to the Muslim prayer call go out from a loudspeaker at the Blue Mosque nearby and looking out across the glimmering Sea of Marmara. The vested, mustachioed hotel owner followed me up the spiral staircase to the roof with a silver tray and served thick, bitter coffee and oranges along with puffy white bread and goat cheese. I felt like a spy, or at least a spy’s girlfriend.

One rainy Christmas Eve, I wandered the streets of Paris. Layers of 12 European languages penetrated the mist as translations of Midnight Mass poured out of cathedral Notre Dame’s crackling outdoor speakers.

Then there was the catered, tented bonfire party in Sidi Kaoki, a beach village some 25 kilometers south of Essaouira in Morocco. The journey alone from Marrakech had been harrowing and I was just glad to be alive and to have finally seen the famed black goats balancing on the branches of small trees. Berber women served desert tajin and later joined the festivities by singing like exotic birds. A couple of scrawny local “cops” danced as if they were imitating the riding of a bicycle while balancing beer glasses on their heads.

In the historic city of Antigua, Guatemala, it was just a beautiful mess of fireworks and the rumblings of volcano Pacaya from dusk until dawn.

When living in Madrid, a writer friend set me up on a Christmas Eve blind date with a soulful, kind and cute musician/professor from New York with a great sense of humor. We met at the Metro Chueca, my neighborhood’s subway plaza, and ended up walking nearly two hours together in the freezing rain unable to find any place open for dinner. We peeked into a Cuban restaurant and were welcomed to crash a private family party. One drunken tio sang electric love ballads under the neon lights as we ate refried beans, drank lime margaritas, and laughed despite our numb toes and soaked clothes.

These past two years, having moved to San Francisco with only two days off from work at Christmas has made the holidays decidedly different. I have been resolute, however, to make the most of these mere gasps of freedom and bring to them the same sense of originality and inspiration.

My ideas have been staycations, with a twist. No sofa loafing allowed. My first impulses last year were to be both creative and cozy in a wild and natural setting, the exact opposite of my day-to-day grind in the city. Being in love fueled my inspiration to embark on a culinary adventure. We loaded my Honda Element with decadent groceries, candles, his guitar, lots of warm layers and headed up the winding coastal road to Stinson Beach just 40 minutes away. We checked into a small cabin with a kitchenette, lit the fireplace, popped open the champagne, ate some strawberries dipped in balsamic vinegar and then I cooked a four-course feast. It took a few hours to work out the improvisational recipes, but by the time our dinner was prepared, he had been able to share in the creativity with his own improvisational strumming.

That night we got to rediscover just how much we could enjoy each other’s company and conversation when everything winds down. Over a dessert of chocolate truffles, I savored the long-lost pleasure of exchanging gifts on Christmas Eve. The next day was windy and fiercely cold; we walked out along the overcast shores and rocky, cliff stretches of historic Point Reyes. It felt foreign, eerie and wild – just the way I like to feel when traveling.

This year, of course, I wanted something different. Yet, with just two days, what could we do? I searched online for hotel deals and found an incredible rate at the Clift. The Clift is a swanky upscale Ian Schrager project downtown that feels like a sophisticated mix of Gothic fiction and Alice in Wonderland. Sexy Christmas! At reception, due to low occupancy for the holiday, they instantly gave us a free upgrade to one of the best suites there. It was huge and exquisitely designed with two walls of windows revealing a moonlit cityscape.

Dressed up and ready for our date, we headed through the opulent lobby of outsized, sculptural furniture to the Asia de Cuba restaurant. Sitting among the tables of A-list actors and other Hollywood types, we were lavished with wine and seafood and spices. The surreal scene continued with a shared Grand Marnier in the Redwood Room Bar, a lounge with warped artwork that seems to induce an absinthian state upon entry. Outside the hotel on Christmas morning, San Francisco was hushed. It was like an entirely different city with not a car in sight. We could hear the calls of seagulls as we wandered through Union Square and over to Café de La Presse for breakfast. What with the empty streets and French café, I felt a million miles away from my everyday here. We talked of our hopes and imaginings for the coming year with the new, broader perspectives that “traveling” brings. It was an absolute rediscovery of this place and ignited a spark in me that used to require air tickets.

With the slightest shift in location and the right mindset, exploring your own hometown and its environs can leave you feeling well-whisked away, refreshed and inspired. When you only have a day or two of freedom, be a travel goddess and take a staycation. 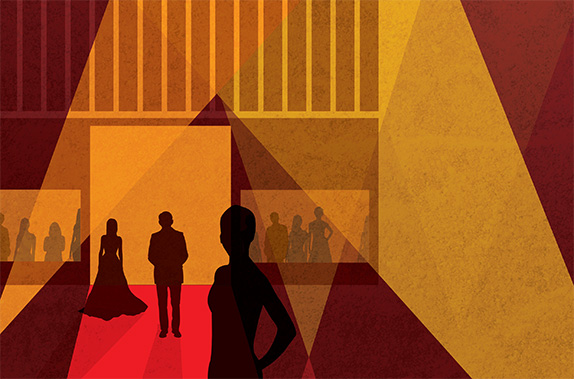 London: Snuggle down and deep for Oscar Week!