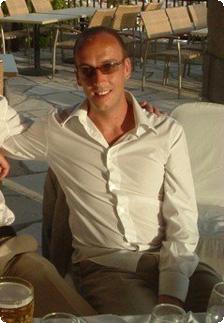 Occupation: Not yet decided

Park Tivoli is a good spot. When the sun shines, the bronzed and beautiful of Ljubljana seem to gravitate towards this area just outside the centre. I like to walk around holding a leash and calling the name ‘Nika’, as if I have lost my dog. Seeing as one in every three girls in Ljubljana appears to be named Nika, it is never long before I attract the attention of one of the hypnotically beautiful Slovenian girls in the park. Sadly, I have never managed to get further than explaining that I am looking for my dog, and mumbling something about having a drink later. But at least I’m getting some exercise.

2. Where is your favorite table for two?

The Bachus Center lives up to its name on the weekends. For an unabashed Hemingway fan like myself the Casa Del Papa, just north of the railway station, is the first stop on any big night out. There are lots of pubs and clubs around the centre of town, but the jewel in the crown of nightlife options is Metelkova. This ‘autonomous social centre’ can be a little intimidating at times, but it’s well worth getting involved in. It’s like Kristiania, Central European style.

3. Where should we stay when we visit?

You should try the Antiq Hotel This is a wonderfully cosy place in the old town. For something a little more interesting, a stay at the Celica Hostel is definitely top of the list. This is a former prison in the centre of town that has been converted into a hostel. It was named as the #1 hostel in the world in 2006. It rocks.

4. What qualities do you find irresistible in a woman?

An infinite curiosity, a quick mind and a big heart.

5. Where can we find you on a free Sunday afternoon?

6. What do you love most about your hometown (besides our arrival)?

In the main square, Presernov Trg, stands a statue of the most famous Slovene poet and national hero, France Preseren. During his lifetime he had an unrequited passion for a local woman, Julija Primic. On the opposite side of the square is a window relief featuring a sculpture of Julija looking down forlornly at the man who loved her. At the railway station there is a small memorial dedicated to James Joyce. What did the wordy Irishman do to deserve this honour? He mistakenly disembarked from his train at Ljubljana station, thinking he had arrived at his final destination, which was Trieste on the Adriactic coast. This was when he was still a struggling writer. He and his wife spent the night in a nearby park and resumed the journey the next morning. Is this geographical faux pas deserving of a plaque at the nation’s foremost railway station? The Slovene’s think so. The national anthem is a song about drinking, and the name Ljubljana can be loosely translated to mean ‘beloved’. Ljubljana is wonderfully quirky, irreverent and full of character. Even the graffiti has a bit of style and mystery. What’s not to like about this city?

You should bring an open mind, and my phone number, but leave behind any pre-conceptions you may have about former Yugoslavia. You should leave with a new-found respect for Central European states and a fixation with accordian music.

8. What do we absolutely have to see while we’re there?

9. Any areas of town we should avoid?

Of course not. If I did they would no longer be secrets! Okay, just one: the neighbourhood of Trnova is wonderful. The rest you will have to find out for yourself.