Wellness: Half Moon Bay, CA: I Left My Heart

I swear he winked and smiled at me

Kathy and I in the garden

I feel better than I look

I swear he winked and smiled at me

If Tony Bennett lost his heart in San Francisco, I found mine in Half Moon Bay.

Located just 25 miles south from San Francisco, this seaside city usually boasts mild weather (with morning and nightly fog) but ironically welcomed me with unusually warm weather during my visit, which coincidentally paired with the heat of my impending divorce. My weekend escape to this coastal gem proved to be the perfect weekend getaway.

Situated on a bay of the same name, Half Moon Bay is best known by locals for several things: Christmas trees, fishing, artichokes, and probably most popular, its pumpkins which are celebrated in an annual Art and Pumpkin Festival on Main Street downtown every October. Tourism has also been on the rise and it’s understandable as there is much to do whether you want to relax or have an adventure!

About a mile before entering this magical mini-kingdom, there’s a statuary that boasts house-sized metal sculptures that range from prehistoric dinosaurs to bison—a sort of mythical gate of protection for the treasures that abound. A sort of “Harry Potter Chess Game” feels as if there’s a last minute warning: upset the balance of nature while visiting and you may very well not be coming back.

Immediately after this curious display, you pass fields of flowers, fruit stands, and a very old cemetery (perhaps for those who ignored the warning?) that leads to Main Street, one of the main arteries of Half Moon Bay. Past storefronts and galleries, I pulled into my place of sanctuary, The Old Thyme Inn.

Welcomed warmly by innkeepers Rick and Kathy Ellis, I have that familiar feeling as if I’ve known this couple for years. Words from their Internet ad inject me by sheer osmosis of air: “Come gather your peace at the faraway nearby.” And that is exactly what I did.

Rick and Kathy moved from Northern Virginia in 1998 when Rick said, “Let’s go do something fun!” Fun entailed owning and operating a luxury bed and breakfast, and together they decided to end a dream-filled quest with a B & B along the ocean. With luck and a pocketful of funny stories, the two of them haven’t stopped since the day they bought the 108-year-old house.

Rick works on the daily maintenance and Kathy makes breakfasts (some of the most delicious I have ever had, by the way… I’m still craving those muffins!). Kathy’s love for painting is evident as her paintings adorn the walls of this cookie cutter place of comfort. “Make yourself at home,” Kathy tells me and I know she means it.

When I trek past the enclosed garden with soothing water fountains and climb the stairs to my room, I think I’ve died and gone to heaven. A four poster bed awaits with whatever counts of thread denotes luxury, and there’s a burning fireplace with a soft comfy chair in which I immediately imagine myself curling up to read…Or do I first take a soak in the sunken tub complete with candles and bath salts? Dozens of journals are stacked on and under the night stand that elude to romantic getaways, some rivaling the best erotic novel… oh my, pinch me… I’m not in Kansas anymore!

I could have just stayed in my room and did for a good part of the day until I walked the three blocks to Half Moon Bay Massage at 940 Main Street. If I had died and gone to heaven, the angels were present every step of the way as I surely felt like an angel as they escorted me back to the inn after one of the most amazing rub downs I’ve received.

Back in the oasis of my room, I patiently awaited the water to rise and immersed myself in the fluid of the tub. Thoughts floated above me and if there was a negative one, it seemed to dissolve as quickly as the bath salts. As a woman that felt more like jello then cheesecake, I had food on my mind (particularly of the sweet kind) and wrapped my greasy hair back into a twist and walked a couple blocks to Cetrella Bistro and Café.

Named as one of the top culinary restaurants in the country, it was clear as to why with a luscious Mediterranean cuisine that graced its menu with inspiration from the villages of France, Italy and Spain. I ended up meeting another solo gal whose husband gave her a break from the kids by sending her off to HMB (Half Moon Bay).

Of all the amazing things to choose from, the pommes frites, better known as fries, were to die for. And dessert, oh my! I had the warm Scharffen Berger chocolate cake with vanilla bean ice cream and blackberry sauce. Chocolate really is a girl’s best friend.

I had one of the best night’s sleep I can remember and awoke refreshed. I took some time to read and write (what a luxury) until my “breakfast in bed” was delivered with a smile. Brought in with a beautiful visual presentation of flowers and smells that gave new meaning to sensory details, I truly was inside the pearly gates.

Shortly after, I drove my car to Abundance, a skin care spa, and received a relaxing facial that combined massage as part of the treatment. I must have done something right in my life, as I felt truly pampered.

God, however, has never been more present in my life as when I can feel his heartbeat through the pulses of the waves and his whispers in the wind so I headed for the beach right after my facial. At Pillar Point Harbor, at the northern edge of Half Moon Bay a protected landing for boats, is the place where I rented a kayak and cruised the edge of a world filled with an abundance of sea life.

What began as a rural agricultural area which focused on grazing cattle, horses and oxen used by Mission San Francisco de Asis in the early nineteenth century, Half Moon Bay has come a long way, baby! Known originally as Spanishtown, the area is now home to almost 12,000 people. And amongst the thousands around me, I felt like one very special lady as I drove away from Half Moon Bay and headed home.

After reeling from what felt like a magical weekend, I swear I saw the 20-foot metal Tyrannosaurus Rex wink and smile!

Find ratings and reviews for Half Moon Bay CA Hotels from TripAdvisor, Frommers, Fodors, etc. all in one place 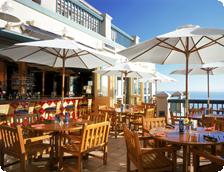 Wellness: Check in and check out: Monterey Plaza Hotel & Spa

Wellness: Costa Rica: In Search of Sloth, the Sweetest Sin