And the winners are…Bhutan is more interested in measuring Gross National Happiness than GNP. Once upon a time, the very enlightened king of a faraway nation in the sky decided that measuring the success of his country in terms of products and money just didn’t do the human race any justice. So he came up with the idea of GNH: Gross National Happiness. The Buddhist king takes a measure based on 4 pillars: sustainable and fair economic and societal development, learning about and preserving their ancient culture, taking care of the environment, and of course enlightened leadership. Hopefully like the Democrats now that they’ve taken back Congress? :)

Monaco has the highest population density in the world. It’s a tiny place, and all them princes and counts practically live right on top of each other! Remember, pop. density means the number of people living in a measurable unit. China has tons of people, but it also has tons of land. Did I kinda fool ya?

The world’s longest river is the Nile, at 4,160 miles long. Another interesting fact about the Nile is that its source is to the south and so flows northward, draining into the Med.

The first woman to ever summit Mt. Everest is from Japan. Junko Tabei completed her climb in 1975. According to Wikipedia, Junko’s team got buried under a sudden avalanche, and our heroine lost consciousness for 6 minutes until her sherpa dug her out! In 1992, she became the first woman to climb the highest peaks of all seven continents, the Seven Summits, which include Kilimanjaro, Mount McKinley and of course Everest. She enjoys climbing to this day.

Cha-ching! The world’s wealthiest woman is not Oprah, shockingly, but 83 year-old Frenchwoman Liliane Bettencourt, the daughter of the L’Oreal founder. She retains a controlling stake in the company. It looks good on you, girl!

The tallest building in the world is in Taipei. The mammoth Taipei 101 opened in 2004 with 101 floors and 5 more in the basement.

That’s all this month, smart Divas, but don’t worry, there will be lots more world trivia to come! 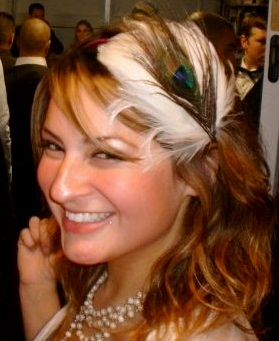 Feather Headbands are all the rage

What Makes a Great Hotel?