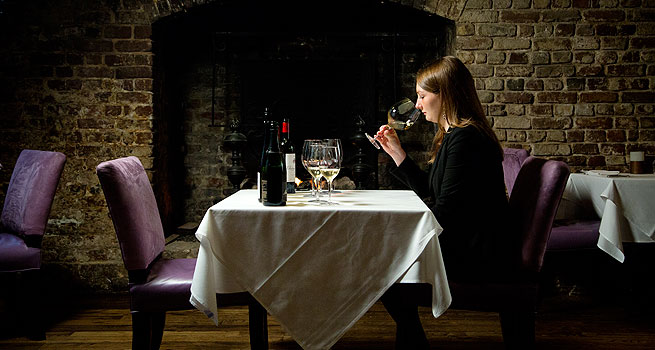 McCrady’s is my Best NEW Southern Food Pick– and man, do I mean off the charts, mind-blowing great food from outer space meets El Bulli with a howdy-dee-do to Low Country Cooking.

The original McCrady’s Tavern was built in 1778 as a four-story Georgian house where many famous leaders would meet to discuss politics over a drink.

A few years later, a Longroom was added on for theatrical performances and events–the most famous one being a dinner party thrown for George Washington. No wonder McCrad’s is listed on the National Register of Historic Places and Landmarks. So, how I can select McCrady’s as my Best New Southern food Choice? I can explain:

1. Chef Sean has only been cooking there a year. Brock graduated from Johnson & Wales University in Charleston, worked at the Peninsula Grill for seven years, then moved to Nashville to become executive chef at the Capitol Grille in Nashville, before moving back to Charleston last year. So HE is new.

2. And his cuisine, which utilizes such diverse ingredients and methods as: methylcellulose capsules encasing veggie purees, hydrocolloids, liquid nitrogen pellets of Planters Punch, and freeze-dried fois gras powder, is about as NEW as it gets.

Furthermore, after dining on southern cuisine for the last 4 days, my favorite meal had been the lunch we had at McCrady’s, the third day. Yet my mom and sis were completely shocked when I chose to eat my final dinner here. (One of my cardinal culinary travel rules is NEVER TO GO TO THE SAME RESTAURANT TWICE DURING THE SAME TRIP!) Yet, I was so intrigued by Sean’s creativity, I wanted, no NEEDED, to explore his food further. So without further ado, I’d like to present my finals night dinner:

Yes, there were a few misses, such as my sister’s Crab and Lobster Salad that came buried under a “coconut blanket” that tasted and felt way too polyester for my liking, and I was very sad that there was no imaginative cotton candy offering. But overall, it was a totally incredible dining experience, particularly when you find out that such ingenious, high caliber food is being prepared by a Chef who’s only 28 years old! I decided to interview this culinary genius in-the-making, so stay tuned.

Examiner Writes FLY SOLO is the “Perfect Gift For Her”