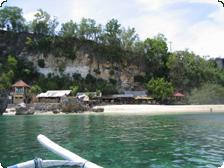 When I went to Vietnam two years ago, I was often a distant observer. I breathed in the scent of the Pho soup that was carefully prepared at the corner noodle shack, but I didn’t really taste it. There were a few days when I almost convinced myself that this wasn’t the case. Then I remembered meeting Bong.

Bong found us one evening in a little park in My Tho, a town on the Mekong Delta. My friend Freyja and I had only been in Vietnam for three days, and we were gloating about the fact that earlier that day we had ditched our government-approved tour group and were on our own. That sticky, humid evening we were enjoying simple things, like sweating to death as we watched children giggle at us, and as old, toothless men resembling Ho Chi Minh raised mugs of cheap hoi beer, poured from plastic gasoline jugs, at us.

It had been evident as we wandered through town in search of food earlier that day that Westerners were not a common sight. Everyone stared at us as we ambled through an open-air market. While we gawked at tin tubs of live fish, and at whole, dead, skinned animals that glistened red in the hot sun as they hung like Christmas lights from wires, the town whispered and pointed. Women touched our clothing and hair, and children ran up to us and said “Hello!” then ran away and hid.

My Tho offered nothing beyond two hotels and three difficult-to-locate noodle shops. We almost went hungry that night as we discovered that, once you break away from the approved tourist track, you are very alone when it comes to food. Even finding a traditional bowl of Pho is difficult when you don’t know the word for restaurant. Moreover, the town was so impoverished that restaurants weren’t common. But staying with a tour meant we’d only meet cheerful tour guides who smiled like Asia Barbies and repeated phrases like “We very happy in Vietnam that you come visit us.” And “You so pretty. I like your hair.”

As diesel-engine boats rumbled by on the water, Freyja and I sat in silence. That’s when I noticed that two girls were watching us. The younger of the two walked up to us with a basket of candy and fed us the typical opening line all Vietnamese street vendors know.

“California,” I told her watching her smile, a brown, rotting tooth in the center of her grin.

“You buy candy?” she asked. I normally said no, but I wanted a pack of gum so I smiled back, and the bartering began. Bartering in Vietnam is an interesting, back-and-forth process. Once you agree on a price, the seller will often try to raise it. They figure if you can afford 2000 dong, why not try for 3000? When we finally came to a happy place in our deal, agreeing on 3000 for a pack of gum, I handed her 5000 dong and she ran away. When I jumped up to protest, the second girl stepped in.

“It’s okay,” she said with a smile. “She bring money.” She pointed to where the little girl was making change at a drink stand. Ever the businesswoman, she proceeded to strike up a conversation with us as we waited, further displaying their good intentions. In the time that it took for the little girl to get us change, we learned that our new friend was Bong, whose name meant flower in Vietnamese, and that she and the little girl sold candy together every day to pay for their schooling and to support their families. When the young candy vendor returned with my change, she of course tried to sell me more candy because she knew I had 2000 dong in my pocket.

We didn’t buy any more candy, but for the next hour we learned that Bong was eighteen, and that she kept an eye on the other girl so she would be safe. We also learned that sometimes people pushed Bong away or got angry with her when she tried to sell candy. Often women would clutch their purses like Bong was going to steal them, and this made her feel bad.

“They have mad faces and tell me to ‘go away.’ I don’t know why they hate me,” she told us in a very serious tone. Then she cracked a smile and said, “It’s okay because I learn more English at university, and then I can talk more.” Bong dreamed about becoming an economist and was studying to get into university in Saigon. If she passed a tough series of exams next month, she might get to go to university. But she would have to pay the $100 per year to go to school. It was hard not to be in awe of her enthusiasm for school, especially when we had read earlier in our Lonely Planet guide that the average family in Vietnam earns only $700 per year. My education cost over thirty thousand dollars—and that was considered cheap. I had spent $100 getting my visa to come to Vietnam. It seemed like her $100 would be a lot of candy sales. Suddenly the 2000 dong I had momentarily fretted over losing felt pretty pathetic, especially when you consider that it’s the equivalent of about ten cents.

As we sat there prying into Bong’s life like every other arrogant first-worlder in the same situation would do, it felt like we should be paying her for her time. But then it was also a catch-22. Would we offend her if we handed her $100 in cash that we had tucked away in our packs at the hotel? I felt guilty when I momentarily wondered if she was a con artist or if she was genuinely interested in us.

It’s hard to put myself in Bong’s shoes. I don’t know what it is like to struggle and beg for one dollar, nor do I know what it feels like when goals like going to school are out of reach. As we swapped addresses and said our good-byes that evening, it was easy to feel that, for a brief moment, we had tasted Vietnam. Yet now, when I look back on that night, I realize that we were still only smelling Pho from a distance. In the case of Bong, though, the fragrance was lovely, and the presentation made us feel like we were closer to discovering the soup’s true flavor.
For more about the author, visit her website at www.shantisos.com.

Inspiration: Fear in the Air: The Human Condition

Inspiration: How To Finance Your (Must Go!) Semester Abroad