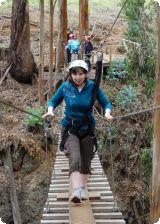 Getting the hang of it

Each zipline gets more daring

Posing with the gear

I’m afraid of heights. Not, like, paralyzing, freak-out-if-I-drive-over-a-bridge fear of heights, but what I would like to consider a reasonable fear. For example, if I’m up at the edge of a building where I would die if I say, fell, then perhaps I might go, ‘Yuck’ and back up a few steps and try to forget the image of my accident-prone self careening over the balcony to my inevitable demise.

This fear doesn’t really factor into my daily life as a land-dweller in Los Angeles, but when I go on vacations it has been known to factor into things. I missed out on my cousin’s getting proposed to at the very top of Angel’s Landing in Zion National Park last spring when the sheer 1,000-ft-drop on either side of the last half-mile of the ascent proved too scary. And on a different trip to Maui with my husband, I may have freaked out half-way through crossing an aqueduct over a waterfall, dropped to my knees, and crawled backwards towards safety. Maybe.

So, you can imagine my husband’s surprise when a few days after the aqueduct incident I was all over his case about how we should go ziplining. Before meeting Josh, I was the quintessential urbanite. I lived in Boston in a third-floor walk up in the densest part of the city. I took the T everywhere, watched several hours of cable TV daily and obsessed over my cell phone.

Six years and two cities later, things are different. We’re still urban and I love my cell phone more than ever (it is LA after all), but after living with an Iowa-raised returned Peace Corps Volunteer whose ideal vacation is hiking into some back country with nothing more than the pack on his back and our dog at his side, things can’t help but change a little.

And while I still don’t precisely adore roughing it (understatement alert), perhaps something about being with a man whose personal idea of heaven probably looks like a clearance sale at REI has given me the security to tap into my inner adventurer, too.

After the aqueduct episode, Josh began to wonder—rightfully so—whether or not I would melt down when standing at the edge of a precipice with nothing but a cable and a pulley between me and death. After all, the aqueduct wasn’t that high up—certainly no match for the heights of a tree-top tour—but it’s not like it had safety railings, either. I claimed I wouldn’t. The day approached. I secretly started to wonder if I would. We went horseback riding and my legs turned to painful mush. I began to claim that putting the ziplining harness about my nether regions would be impossible due to my ‘injuries.’

Luckily Josh knows well enough to ignore my weaseling out threats by now, learning years ago the wisdom in the ‘suck it up’ approach my father has always used on me. The morning of the zipline arrived. We got in our rented Jeep (another Maui delight) and headed half-way up Haleakala—an inactive volcano with a beautiful moonscape-looking crater at the center and the highest point on the island.

The zipline tours on Maui are run by Skyline Eco-Adventures, an eco-tourism outfit that offers two separate tours—one that makes the best of an invasive eucalyptus forest about mid-way up Haleakala in Pukalani (i.e., upcountry) and another bigger one in Ka’anapali in the Mount Kahalawai valley (i.e., West Maui). We opted for the shorter, less intimidating one, reasoning that ziplining over more forested gulches would provide less opportunity for melt down than over huge expanses of nothingness.

We got there. I shakily signed away my rights to sue from whatever vegetative state a fall would leave me in, and silently prayed my bowels would resist the urge to explode while I waited for our time to come. Others around us talked about how nervous they were. They were not helping.

Luckily the Skyline folk obviously move a lot of people in and out everyday, so they quickly suited us all up in our harnesses and helmets and then set us off on a 10 minute hike through the woods to our first platform. What with it being an eco-tour, they told us about the flora and fauna on the way, and cautioned us repeatedly that the biggest danger to us today would be tripping over the tree roots on the hike. I promptly tripped over some roots.

But before I knew it, the moment of truth was upon me. I didn’t want to go first—I needed to see someone else go before me. But I may have actually gone second. And it was easy. And not scary. And fun.

The guide hooked me in, and seconds later I was on my way—soaring like Indiana Jones over the 70-foot gulch below. “This is totally reasonable,” I thought. Then I tried to land. It seems that after a lifetime of skiing, my brain was reading the landing platform as ‘chairlift exit’, so instead of running up the platform as I was told, I would freeze my legs stiff (obviously for better balance with my imaginary skis) and then bounce around the platform. Luckily again, I am not the first to mess this up, and the guides are used to catching people when they land. Suffice it to say when I finally got it right, I was greeted with a round of applause for my fellow zipliners.

The Haleakala course has a handful of ziplines, each one slightly more challenging than the last. Some of the platforms require you take a running start, others that you just step off. From some you can see what is ahead of you, from others, you don’t know until you are soaring over it. Each has a plaque depicting an endangered bird—keeping with the ‘eco’ nature of the tour—about which the youthful and happy guides give you a very quick spiel before sending you on your way.

And there is one rickety rope bridge thrown in for good measure (I could have done without that), before the pièce de résistance, a super-long line over a nearly bottomless ravine, on which you zip so fast that you actually bounce backwards at the end and go halfway back over it again in reverse before momentum pulls you back to the other side—where the guide must fetch you with a giant ladder. In short: it was terrific.

So the question is: After ziplining, will I be hanging out on any fire escapes in the near future? Absolutely not. But if you clip me on with a harness and a wire and shoot me over to the building across the way? Well now that sounds perfectly safe.