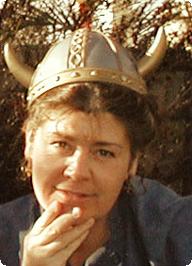 Elizabeth Podsiadlo is busy coloring. She’s helping her eight-year-old daughter with a school project, but that doesn’t mean she’s unavailable for a quick chat. Podsiadlo is good at multi-tasking and as of now this opera singing chef’s plate is quite full.

Her annual music program, “Slow Growth” just wrapped up which featured some of the brightest voices in San Diego County. She is currently working on a television series that would incorporate cooking, music, traditions and environmental awareness as well as a CD that would feature recipes and songs. These are all undertakings that are in addition to the cooking classes she teaches, the choir she sings in and the folk music group she is a part of. Take note that she is also a mother. The truth is Podsiadlo has her hands dipped in so many different activities that it is hard to keep track of her many endeavors. Yet even with a busy schedule, Podsiadlo still takes the time to respond to all of her emails from inquisitive students. This is the life of San Diego’s Opera Singing Chef, through her classical music and unique recipes she is defining who she is one song and one snack at a time.

You just finished a music production called “Slow Growth IV: Pirates of the Pacific,” what was that like?
The performance included opera singers, Celtic music, new music, bagpipes and a children’s choir. It was quite literally opening at the scenes, with people breaking out of character, but in part that’s what makes it special. I think that it is important to have a live, personal exchange. Watching movies and television shows is just not the same as being in the audience at a live show; I wanted to bring that energy to the audience members.

You are drawn to classical music, why?
Opera, like ballet is the martial art of voice. You must make a big sound using small resonators. Creating this grandiose noise from a tiny amount of energy is incredible to me.

Where did you learn to sing opera?
Pandeli Lazaridi, who is affiliated with the Small Opera of San Diego, is incredible. Learning to sing is like stripping away old furniture. The hardest part is putting the varnish on at the end. Lazaridi knows exactly how to polish someone’s voice, no matter how inexperienced they are.

On that note, who is a musician that has inspired you?
There are many people that have inspired me with their musical talents, but I can’t narrow it down to just one, because inspiration is something that is constantly streaming. I would have to say Joni Mitchell, Janet Baker, Sarah Walker, Anna Moffo, Fredericka Von Stada, Jethro Tull and Led Zeppelin. Then there are plenty of folks in San Diego that inspire me: Pandeli Lazaridi, my teacher who has shown me more in four years than all of my teachers put together. Peggy Watson, a local Folk Artist and friend, for me sets a wonderfully professional standard as a singer in her public appearance and recordings, which are always “star quality.”

What are your plans for the upcoming CD?
My idea is to record themed CDs, for instance, one focusing on Italian traditions, maybe one regarding German themes. I don’t think this necessarily has to be a daunting effort. It won’t be a huge album, and I’ll probably just include three or four recipes with the same number of songs.

What sorts of dishes do you prepare for your students?
I am a huge fan of full flavored dishes and unusual foods that don’t require expert hands to prepare them. A particular recipe that I am a fan of is a reduction of wine and balsamic vinegar that when completed tastes similar to Hershey’s chocolate. The key is to pour it over a bowl of fresh fruit and people are pleasantly surprised by its unique, tangy flavor. I can include a recipe for the article as well, if you like.

Thanks, I wasn’t sure if you wanted to share all of your secrets.
It’s not a problem, I’d be happy to.

Your interest in cooking stems from watching your mom in the kitchen when you were little, what are your memories of that?
My Mom lived through World War II, so holiday traditions were very important to her and it was considered a precious experience to be feasting with the whole family. When I was young, my bedroom was located right next to the kitchen. I was very drawn to my mom’s cooking. We lived in a little farmhouse in West Virginia and she made everything from scratch. She would make this delicious Chicken Pecant that I absolutely loved. The recipe stayed pinned up on our pantry wall for years.

What do you hope people will take away from your cooking classes and your singing?
An open mind. I am a very simple person and I hope that while people watch me cook and sing, they will think: ‘If she can do it, I can do it.’ Most of these people have never taken any cooking classes at all, it’s a great way to expose them to recipes and also to help keep them from duplicating the same mistakes I made while I was learning.

Anything special coming up for Halloween?
On October 30 I will be on KUSI radio station and will be making a garlic bisque. It’s tasty and it’s excellent for keeping the vampires away.

Vampires might be the only ones veering away from Podsiadlo’s delicious delicacies. In her fourteen years in San Diego she has developed quite a repertoire, with a list of over one thousand addresses on her email account. Yet, what perhaps is most remarkable is the high regard in which she speaks of the people that have inspired her over the years. From her mother, to fellow singers, teachers, students and her daughter, it seems Podsiadlo would rather spend most of her time talking about them than about herself. Perhaps, though that is her greatest gift to the community of San Diego, her whole-hearted appreciation for not only the finest things in life, but the finest people as well.

Elizabeth Podsiadlo teaches cooking classes thru OASIS and also at other organizations and venues throughout San Diego County. Her upcoming classes take place November 3rd and December 1st. Check out her website for further details.
http://www.theoperasingingchef.com/index.html

4 Cloves garlic — cut in half

Preheat oven to 375. Wash chicken and pat dry with paper towel. Place chicken in a large glass baking dish. Mix the brown sugar, oregano, rubbed sage, and ginger together in a bowl. Pour the soy sauce over the chicken pieces, then sprinkle with the dry herb mix, coating the top of each piece of chicken. Place the chopped garlic around the pieces of chicken and place uncovered in oven on center rack for 45 minutes. Turn pieces and reduce heat to 350. After 1/2 hour turn chicken and put back into oven and reduce heat again to 325 continue baking for 15 minutes. You want the sauce to reduce and caramelize and become thick. It is not gravy but a wonderful coating.