Emma has been traveling the world since she was two. I know—I was there at the airport when she threw up all over her mother before boarding her first flight to New Zealand. Twelve years later, nothing stands in her way! She is capable of going anywhere and doing anything. She is smart, funny, and her beautiful blue eyes are listening. At fourteen, she is our youngest contributing Diva, sharing her fresh perspective with us all. I am delighted to have inspired her with my travels and to have created a new path for us to walk down and share on Tango Diva.

The Flight: We left from San Francisco International Airport at one am—that wasn’t too great. I flew with TACA airlines, which I had never heard of before. The flight attendants were nice, and it was a smooth, seven-hour flight. I arrived in San Salvador, El Salvador, before making my way to San Jose, Costa Rica. I got on another TACA flight, and it was about two hours before we arrived in San Jose. Neither of the flights felt long at all. Right when I landed, I got on a tour bus and drove through the city of San Jose.

The Weather: I was there from June 14 to June 26, 2004. It was very humid every day, but I got used to it after two days. It was sunny for the first week, and then it started to rain. The weather is very unpredictable, so pack every type of clothing.

What to Bring: If you are going in luxury, then you can pack as much as you like. I had to carry my luggage the whole time—I was roughing it. My suitcase weighed roughly thirty pounds, and it was difficult trying to carry all that on my back. So if you’re planning to go hiking and do activities like that, then I suggest that your suitcase weigh under twenty-five pounds. You should bring a poncho or a rain jacket because it often rains unexpectedly. Also bring some sort of a hat, a baseball cap or a bucket hat, whichever you would like. Basically everyday I wore a bucket hat, a sports bra, a tank top, zip-off nature pants (REI), thick socks, and hiking boots. I had a day pack with me everyday which held a poncho, my Tevas, a one-liter water bottle, some snacks (Luna bars, etc.), my journal, my CD player, sunscreen, lots of bug spray, and I always had my camera with me. You should definitely bring a journal with you—it helps you remember all of the good times you had on the trip when you get back home. Have a camera ready at all times—you never know when you will see something great. Also bring a lot of bug spray or else the mosquitoes will eat you alive, not kidding. Overall, pack light.

The Hotels:
The first place I stayed at was called El Pizote Lodge. It is in Puerto Viejo, Limon, and there was the Puerto Viejo Village just down the street. They have two types of rooms there, one like a cabin that has two beds, a nightstand, and some shelves. The other type of room is like a villa, which has one bed and includes a shower and bathroom. All of the beds have bug nets attached to them, which was very helpful. The showers and bathrooms were alright, you have to share the bathrooms with other guests as well. It also has a pool, but the beach is just down the road. They also include all of your meals. The village was great, there are a lot of souvenir stores and craftsmen selling their jewelry on the street. There is also an Internet cafe in case you want to say hi to someone back home. There are many good restaurants there as well, they have some of the best fish I have ever had in Costa Rica. Overall on a scale of one to five, five being the best, I would give El Pizote Lodge a three. It’s not the best place, but it’s not the worst either.

The next place I stayed at was called The Serafine Station, which is a turtle reserve. It was a volunteer station where I would go on turtle patrol at night to look for poachers. I stayed in a cabin-type place, which had two sets of bunk beds and that’s about it. Everything is solar powered, so sometimes during the day I wouldn’t have any light, so bring a flashlight. It is also in the forest, and I planted some trees to help the reforestation process. The ocean is only one-fourth of a mile away, you can feel the breeze from the cabins. During the day I would go on walks along the beach and pick up trash, or go on a walk through the forest. You have to be extremely careful if you go on a walk in the forest, as there are many venomous snakes and spiders that can kill you. The group that I was with actually found a Ferdelance snake, which is the most aggressive snake in Costa Rica and can easily kill you. Our guide poked it, which was not the best idea in the world—that was very terrifying.

During the night time we would take shifts for turtle patrol, I always did the twelve am to four am shifts. There was thunder and lighting the first night I patrolled so we had to go in early. The next night was clear and the stars were incredible. We lay out on the beach and just looked at the stars, it was unforgettable. The final night I did patrol we actually saw a Leatherback Turtle laying her eggs. The Leatherback Turtle is an endangered species and poachers love to sell the shell and the meat. The turtle was a little over five feet long and was pretty wide as well. I actually got to pet the turtle’s shell, which was amazing. I will never forget that night. At the Serafine Station there were a lot of bugs. There were massive crickets, fire ants, leaf cutter ants, black ants, spiders, wasps, and many more. Even the black ants in Costa Rica bite and it stings. The Serafine Station gets a two on the scale, but I wasn’t there to be in luxury.

The next hotel I stayed in was called Los Lagos which is in Volcan Arenal. This is a very nice hotel compared to the first two I stayed in. All of the rooms have marble floors, 2 queen beds, a TV, a fridge, and a huge bath tub/shower. There are also three waterslides, which are fun but aren’t that safe. There is also a hot spring pool, like a huge hot tub, that has a built in bar, so you can be in the water and have a drink at the same time. There is a restaurant, a canopy tour, a souvenir store, and an alligator farm on the property. It is a very fun hotel; you are always entertained. There is also the view of the active volcano, which is amazing when there are no clouds. I would give Hotel Los Lagos a four on the scale.

Other hotels I stayed in were the Hotel Belmar in Monteverde, a crowded village with good shopping and some of the best coffee. The hotel had amazing views, especially at sunset. In the heart of San Jose, I stayed at the Hotel Don Carlos. And the Punta Leona Beach Hotel was my favorite. They have many different sections named after different countries. I stayed in Cuba. This was like a resort and had tennis courts, scuba diving lessons, beach volleyball courts, miniature golf, many restaurants and snack shacks, a disco, lots of bars at the pools, and forest walks. It was located on a nature reserve and there were many exotic birds. They have two beaches on their property as well. I went to Playa Blanca everyday I stayed there. It wasn’t crowded at all and there were some surfers. It was sunny everyday and the water is warm, which is a nice change from the Bay Area. Watching the sunset was probably the best thing I did while I was there. It was beautiful over the water. I also got a tan, which is always a good thing, but wear a lot of sunscreen and you will still get a tan.

The Must Do’s: You have to go on a Canopy Tour—the one that I went on was called Sky Trek/Sky Walk in Monteverde. It was amazing. You go through the trees and over the canopies—I was so high up above the canopy it was a rush. You also have to go to a waterfall, any waterfall. They are so beautiful and unforgettable. Also you have to go horseback riding through the forest, that’s just fun. On a nature hike through the forest, you actually learn something new. There are also many insect museums and butterfly gardens. The best butterfly garden is in Monteverde. They are all so beautiful and sometimes they land on you. You also have to go white water rafting, it is such an intense experience and you will never forget it. Those were all of my favorite things that I did in Costa Rica so I suggest that you try them if you go there.

The Sites: Anywhere you go in Costa Rica there is a breathtaking view. So once again always have your camera out and ready. I saw beautiful sunsets on the beach, there was green everywhere on the mountainsides, lakes and oceans; everything that I saw was incredible. There is something amazing everywhere in Costa Rica. 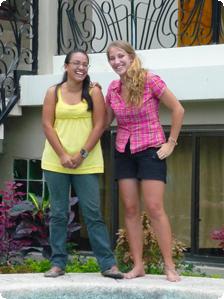