Like many women, I used to be afraid to travel alone. But when my sister fell back on her promise to show me Chile, I knew that if I wanted to go, I would have to go alone. I had completed my course work for graduate school, and felt the walls of adult responsibility closing in. This was the time to visit South America. If I waited until my sister was going to take another trip to Chile or until a boyfriend who was willing to travel with me appeared, I knew it would never happen. Following your dreams, I was learning, often meant blazing a lonely trail.

I dreamed of South America. I dreamed of the incredibly high, sharp peaks of the Andes, dusted white with fresh powder. Steep, exotic mountains filled with equally exotic ski instructors who would guide me through the mysterious mountainous abyss. I dreamed of adventure, danger, and discovery. In truth, I didn’t really know what to expect, but the mystery was part of the allure.

A new beginning: I was planning a three-month trip to South America. I didn’t know how to speak Spanish, but instead of being a deterrent, this gave me a reason of why I should go. I found a language school on the Internet. My plan was to study Spanish in Santiago, Chile for two months and then travel alone for the third month. My parents worried that the language school I signed up for wasn’t real, just a big scam. Even before I left, they tried to scare me into staying home, but quickly realized that my determination to take the trip overshadowed any fears I had. I needed change and I was hoping that a short move to Chile and a drastic change in landscape, culture, and language would open me up to new possibilities in my life. The language school notified me that I was placed with a Chilean roommate, Maria Jose Anriques, in her apartment in Nunoa, Santiago.

My arrival to Chile was rocky. Always one to save money, I opted for the cheapest flight, whose arrival time was three in the morning. Groggy and sleep-deprived from my red-eye, I sleepwalked through my arrival. My somnambulism quickly ended when I was ready to leave the airport and couldn’t find anyone from the language school among the crowd of people at the exit. In the confirmation letter, the school said it would send a driver to pick me up. Panicked, I dug through my purse for Maria Jose’s telephone number. Luckily, I found it, and with the help of a kind Chilean I was able to call her. My first words to my new roommate were, ¿Habla Inglés? Fortunately, she responded in English, “Yes I do.” I explained the situation, and she told me that she had been told I was arriving the following day. Well, technically this was true…I told her I would take a cab to her apartment, and she promised to buzz me in when I arrived.

I got in the cab and breathed a sigh of relief: I was on my way to Maria Jose’s apartment. We drove through the darkness toward the brightly lit city on the horizon: my new home, Santiago. The adrenaline from my airport crisis coursed through my veins, and the excitement of meeting my new roommate made me tense with anticipation. An awkward silence filled the cab: the driver didn’t speak English, and I didn’t speak Spanish.

Not to say that the cabbie seemed threatening. He had a big, wide smile and a friendly, happy-go-lucky demeanor, exuding typical South American warmth. Yet I could feel his intense curiosity about me, a young gringa who didn’t speak Spanish, traveling alone at three in the morning. He desperately wanted to communicate with me, and it made me uncomfortable. He looked back and forth between me and the road. I tried to have a conversation with him.

He asked me why I was visiting Chile. That much I could understand. I was able to explain, using the little Spanish I knew, my intent to study Spanish. This answer made sense to him. ¿Tiene miedo? he asked. No sé ‘miedo’ I replied, not understanding what the word meant. Miedo es ‘Boo!’ he explained. Oh, I understand! Yes, sí, I replied. Of course I was afraid! I was alone in a cab at three am with a perfect stranger who did not speak English. I was driving into a huge metropolis to meet and live with a girl who I only knew through the Internet, via a flakey language school that had stood me up at the airport. I had taken a leap of faith. And yes, I was afraid. But fear is part of the landscape when you jump into a new chapter of your life.

The silence in the cab resumed, apparent that I had exhausted my Spanish vocabulary. In the darkness I could see the outlines of Santiago. It was a modern city, with tall skyscrapers and with ornate, European-style architecture mixed in with modern buildings, those in good shape mixed with those in need of repair. Santiago, the capital of Chile, is a modern city even by the standards of the developed world. In 1970 a communist government was democratically elected into office, with Salvador Allende as president. He enjoyed a successful first year, but divisions within the left and opposition from the right eventually led to a violent 1973 coup and takeover by a military regime led by General Augusto Pinochet Ugarte. Pinochet’s violent dictatorship lasted until 1990, when democracy returned to Chile. During Pionochet’s rule, thousands of Chileans marked as leftists were tortured, detained, and murdered. Despite the violence, the country progressed economically during these years. Some of the success of Chile’s economy has been due to its ability to tap into its natural resources, including fruit, wine, and the nationalization of its copper and zinc mines, which occurred during Allende’s rule. Recently tourism has become a growing industry, as the country has proven to be stable and safe, with its world-renown skiing and an abundance of stunning natural wonders like Patagonia and the Andes.

In the quiet of the night, Santiago looked like any other modern city. The cab slowly pulled in front of a small, modern, four-story apartment building. My new home was tucked away from the more urban environment in a residential neighborhood.

After being buzzed through multiple layers of security doors, I came to the staircase. Maria Jose was on the fourth floor and there was no elevator. I quietly climbed the staircase with the cab driver behind me, carrying most of my luggage.

It was almost four in the morning when I finally met Maria Jose. She greeted me with a kiss on the cheek, showed me my room, handed me a key to the place, told me she would leave early for work in the morning, and went back to bed. It was a leap of faith for her as well to invite a stranger to live with her. I felt her warmth immediately, though. As I curiously walked upstairs to my new bedroom, I was taken aback by the upstairs hallway. Its wall was decorated from top to bottom with a collage of magazine cutouts of pop culture icons like Marilyn Monroe, Madonna, and the Eiffel Tower. I could tell Maria Jose had created this herself, and that my new roommate was very hip, stylish, and creative.

A wave of excitement rushed through me despite my exhaustion. I was suddenly thankful to be a singleton—something I rarely feel thankful for. With a little bit of courage and trust in the world, and a willingness to try new things, traveling solo would be very rewarding. While it might be lonely and frightening at times, I knew I would never have experienced this if I hadn’t gone out on my own.

Inspiration: Africa: The Trip Before The Trip 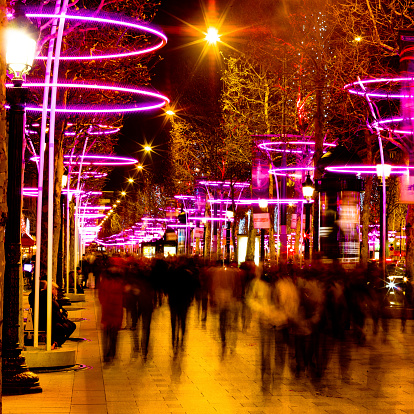 Paris in the Winter