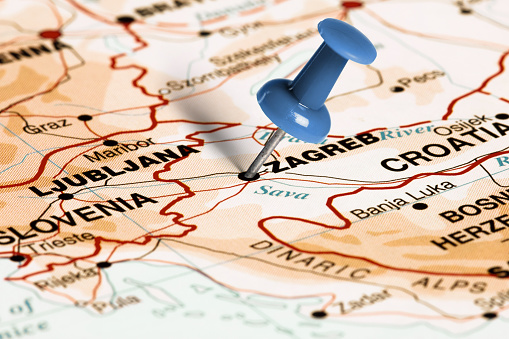 From the window, Zagreb appeared dreary and blurred. Our train lugged itself through a dingy urban strip into the station and I grimaced: ten minutes ahead of schedule. I nudged Anna, my younger sister and champion sleeper, to wake her after the long trip. She frowned and stretched. Ugh, I thought. Even more time to kill in this bedraggled city before our next train connection.

Hours later, we would find ourselves huffing and sprinting along that very same platform, racing to catch our connecting train—we had lingered too long, not wanting to let go of the Slavic capital that had won our hearts. But when the train slowed into Zagreb’s station that morning, I hitched my backpack straps up a notch and lumbered off, commenting listlessly to Anna that we might as well try to make the most out of our eight-hour layover.


Anyone who has ever experienced a layover knows that time-warp feeling: minutes stretch into interminable eternities, stubbornly holding back the long hand of the clock. Hours that might normally contain a pleasant nap and a brisk walk congeal into an unbearable clump of useless seconds that refuse to yield to any paltry attempts to pass the time by reading trashy novels or writing postcards.

Well-acquainted with the layover loop in the time-space continuum, I dreaded the hours we faced in Croatia’s grey capital. Zagreb was a necessary stopover in our grand and ingenious plan to maximize our Eurail Pass days—hopping night trains down from Austria, through Slovenia, and finally stopping in the southern Croatian port town of Split. Zagreb was something to be endured for the greater traveling good.

With this attitude, I stepped out of the dark train station and into lush, green Kralja Tomislava square, which was the tip of the iceberg that slammed into my cynicism. As Anna and I forged deeper into town, the realization came over me: Zagreb was stunning! Stately nineteenth-century houses stood shoulder to baroque shoulder, hinting at a noble past. Streetcars hummed by, crisscrossing lines in a main square throbbing with people.

Anna and I exchanged incredulous glances. Wow. Zagreb. Maybe our hours here wouldn’t be so painful after all. Anna’s weariness vanished as an element of surprise edged itself back into our journey. The sky burned blue and I peeled off the sweater I’d put on in the train car: one more layer of false expectations, gone.


Stalls spilling over with summer vegetables sat adjacent to squares containing iron monuments to unknown viceroys and warriors. Streets lined with rustling trees led up a hill that overlooked the entire city. Couples kissed and whispered on almost every bench, giving the wide promenades an urgent romance. Everything hummed with undiscovered possibility.

Like learning a dreaded blind date is gorgeous, each corner we turned seemed like an undeserved boon. Tiny winding lanes unfolded in front of us, bristling with jewelry stores, art galleries, and strolling Croatians. The giant golden spire of the Katedrala Marijina Uznesejna stretched into the afternoon sky. Inside, the mosaics and stained glass sparkled with ardent fervor. Alien scripts carved into the walls told stories we’d never know.


It seemed against the spirit of our stumbled-upon treasure to delve too deeply into its precise histories and anniversaries. We were just passing through, and didn’t want to ask too many questions.

As deemed entirely appropriate by two vagabond sisters with time to spend, we went straight from the magnificent church to a street café where we ordered piña coladas, for the sheer lunacy of it. The coconut-milky drink went down smoothly, along with thoughts of stories I’d share years from now. (“Once, as I sipped a piña colada in Zagreb…”)


Sunset found us at Zagreb’s high point, a hillside that afforded a wide-screen view of the pastel brushstrokes sinking into the red roofs of the city. Soft noises rose up from the nearby Tolkien’s House, a pub dedicated to the fantasy master’s work, each room depicting one of his darkly magical worlds. Old women selling ears of corn from shiny carts clanked through the streets, offering boiled cobs for a few cents. The yellow kernels burned our tongues as we watched Zagreb fall into darkness. Only two more hours left.

For Croatia’s largest city, Zagreb certainly feels like a web of intimate nooks. Zigzagging down the narrow network of streets, we searched for a comfortable dinner to fill our last couple of hours. With Anna being vegetarian, finding suitable dining had proven difficult on our ex-Slav-aganza so far. Zagreb’s Tkalciceva Street offered all the options we needed: a long strip of open-air restaurants packed with cheerful groups toasting to the end of another long day. Moments later, we too raised our tall, chilly glasses of beer to the warm night and dug in to the broad, thin pizzas in front of us. It was under the awning of this Italian restaurant that we lost track of time.

On our trip to date, Anna and I had made a game of giving each place we stopped an unofficial slogan. Ljubljana’s had been: “Slovenia: Forests Galore!” Split’s was “Once you get here…Split!” While we toyed with dubbing Zagreb “The Slavic Smooching Capital,” we finally decided on the more direct “Zagreb—Who Knew?”

Later, as the night train chugged south (Anna fast asleep, naturally) I wondered if I had found Zagreb so splendid because I hadn’t expected anything at all. I felt certain there was a life lesson to be learned in this, but the sway of the train lulled me to sleep before I could figure it out…