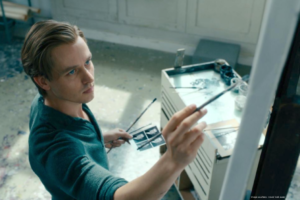 Never Look Away film still of Kurt Barnert (Edward Schilling) and Ellie Seeband (Paula Beer) on there first date walking in the park.
A German production directed by Florian Henckel von Donnersmarck, best known for his award-winning films, The Lives of Others (2006) and The Tourist (2010).
Loosely based on the artist Gerhard Richter, painter Kurt and his wife Ellie flee to West German just before the wall is erected. Kurt’s work is inspired by the tragedies witnessed during the Nazi occupation. He begins to create paintings that mirror not only his own fate, illustrating that the traumas of out life form us and art can free us from the constraints put upon us by family and society.